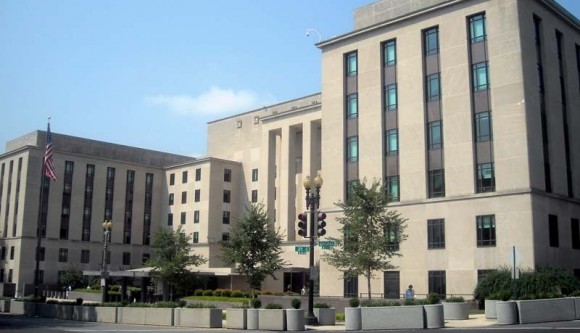 WASHINGTON: A democracy cannot function if it fails to protect journalists, said the US State Department while condemning the attack on a Pakistani television anchor, Hamid Mir.

In a separate statement, the Committee to Protect Journalists said that it’s alarmed by the continuing violence directed at journalists in Pakistan.

Also, in a joint resolution, Washington-based Pakistani journalists demanded protection for their colleagues in Pakistan and urged the government to catch those responsible for the attack on Hamid Mir.

“The US condemns the vicious attack on television journalist Hamid Mir in Karachi on Saturday, the latest in a series of worrisome attacks on journalists in Pakistan,” said State Department spokesperson Jen Psaki.

“Freedom of the press, including ensuring that journalists can safely carry out their vital mission, is of paramount importance to freedom of expression and to the healthy functioning of any democracy,” she said.

She also referred to a recent statement by the US Ambassador in Islamabad, Richard Olson, who said that attacks like these should be a wake-up call to all who value democracy in Pakistan.

Wishing Hamid Mir a speedy recovery, Ms Psaki urged the government of Pakistan to bring all those responsible for these attacks on the media to justice.

“The attack on Hamid Mir is an indicator that the government of Prime Minister Nawaz Sharif has not been able to reverse the country’s appalling record of violence against journalists, despite pledges to do so,” said Bob Dietz, CPJ’s Asia programme coordinator.

“Full prosecution of the perpetrators of such crimes is the only answer to reversing this history. Police must act swiftly and decisively in this and all cases that have been building up for years in Pakistan. And the country’s media must use their capabilities to pursue their own investigations, as well as pressure the government to take action,” Mr Dietz said.

At an emergency meeting in Washington, US-based Pakistani journalists passed a four-point resolution, demanding that the government and media organisations should take immediate precautionary measures to protect journalists.

They also urged journalist organisations to push aside their differences and publish a policy paper outlining the measures they think could protect working journalists from such attacks. They reminded journalists and media organisations that terrorist groups often use them for propagating their views and urged them to stop publicising statements and press releases by groups involved in attacks on journalists.