Home » Impunity » Need to debate role of agencies, bring them under rule of law 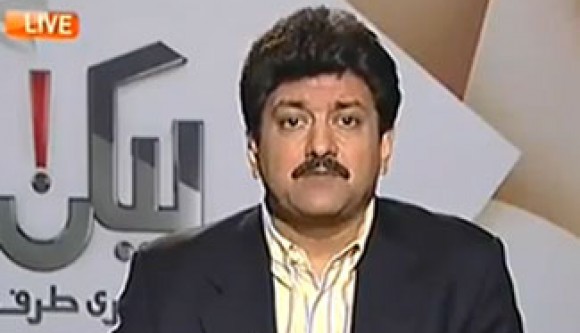 ISLAMABAD: The political class continues to suffer and journalists are under attack from ‘invisible’ players as no civilian government has been daring enough to bell the cat by bringing the intelligence agencies under any legal discipline.

The attack on Hamid Mir and the allegations on the ISI by his family necessitate a debate on this issue as the agencies cannot be allowed to operate as they wish as per their whims, terrorising common citizens, journalists and politicians alike.

It may turn out to be a surprise for many but the fact remains that neither does any agency of Pakistan have laws to govern its functions nor are they willing to submit before the law. This is in contrast with other countries of the world that have carried out intelligence reforms bringing them under parliamentary oversight to hold them to account.

Pakistan lags far behind, however. Agencies have framed Standard Operating Procedures (SOPs) for their own convenience but their actions don’t have any legal authority.

Their officials believe in the notion that the agencies’ work starts where the law fails to deliver. With this thought in mind, they act with full impunity playing havoc with the lives of the citizens without any burden of guilt. But they don’t forget to react if their wrongdoing is pointed out and any such aspersion is considered an attack on national security.

Neither do the agencies want accountability through any legal framework nor has any government made an effort in this respect. Dr Shoaib Suddle stands out as an exception, being a spy chief who had volunteered this submission before the law.

Being the DG IB, Suddle had drafted a law for his agency in order to seek approval from parliament. He was removed by the PPP government before this could have be done. His predecessors have not shown any interest in this regard.

With Dr Suddle’s efforts backfiring, there is no sense of urgency exhibited by parliament for framing statutory laws for the intelligence agencies. This becomes more important given the PPPP and PML-N — both considering themselves victims of agencies — had resolved through the Charter of Democracy (CoD) of holding the agencies accountable.

Article 32 of the CoD is being reproduced below: “The ISI, MI and other security agencies shall be accountable to the elected government through the Prime Minister Secretariat, Ministry of Defense, and Cabinet Division respectively. Their budgets will be approved by the DCC (Defense Cabinet Committee) after recommendations are prepared by the respective ministry. The political wings of all intelligence agencies will be disbanded. A committee will be formed to cut waste and bloating the armed forces and security agencies in the interest of the defence and security of the country. All senior postings in these agencies shall be made with the approval of the government through the respective ministry.”

Pakistan is one of the few democracies in the world with no mechanism of parliamentary oversight of intelligence agencies. Even countries which were previously governed by military rule under authoritarian regimes have carried out intelligence reforms, a study of legislation indicates.

There were many countries without codified law for the agencies but necessary exercises had been carried out in different parliaments in just two decades. As reforms have been completed elsewhere, Pakistan still lacks the will to venture into this practice. Indonesia and Chile, that experienced repressive military regimes for decades, have come up with intelligence reforms through codifying the laws of agencies, thus subjecting them to parliamentary oversight. Turkey, where the military has been traditionally a dominant player, has also passed this legislation.

Likewise, the newborn states of Bosnia and Herzegovina, as well as Slovenia that spent decades under authoritarian regime of former Socialist Federal Republic of Yugoslavia have made statutory laws for governing the working of their intelligence agencies.

South Africa that came out of the clutches of apartheid regime in 1991 also has laws for intelligence oversight. Former socialist republics in Eastern Europe like Hungary and Poland, have framed laws for holding the intelligence agencies accountable.

As the security and intelligence agencies used to carry out repressive functions under the former authoritarian heads of states, particularly in Eastern Europe and dictatorial regimes elsewhere, the past experience was considered to be a motivating force behind the urgent legislation for reining in the unbridled agencies there. This legislation was aimed to reform the intelligence services in order to change them from a tool of repression into a modern tool of security outfits working under the close watch of the executive and parliament.

Several countries of Latin America like Argentina and Brazil have this mechanism in place for the intelligence agencies’ accountability.

Most of the legislation in this respect has been done in last two decades and the UK stands prominent among those countries that started this in 1989. It codified laws for the MI5 in 1989 namely the Security Service Act and for MI6 in 1994 called the Intelligence Services Act.

Legality requires that security forces act only within their powers in domestic law. Contrary to prevailing practices in other countries, the UK has framed legal basis for its foreign intelligence operation conducted by MI6.

There are different institutional arrangements adopted by the states for intelligence requirements. Countries like Turkey, Spain, Netherlands and Bosnia and Herzegovina have single agency for security and intelligence both domestic and external.

Other states like the UK, Poland, Hungary and Germany, etc., have separate agencies for domestic and external intelligence and security. Canada is a country that has no foreign intelligence agency.