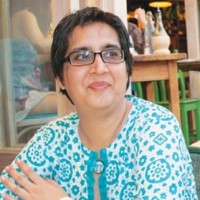 KARACHI: Sabeen Mahmud, the respected human rights and free speech activist was killed by unidentified gunmen on Friday, April 24 in Karachi, Pakistan’s largest city. Mahmud, who was founding director of T2F community centre, was shot around 9pm as she was on her way to home with her mother after hosting an event ‘Unsilencing Balochistan” on the disappeared people of Pakistan’s restive Balochistan province.

According to the police reports Mahmud was intercepted by armed men in two motorcycles, who opened fire from both sides of her car. She was fatally injured with bullets that went through her shoulder, chest and abdomen. Her mother was also injured in the attack and is recovering.

She was the director of The Second Floor knowingly T2F a café and arts space that has been a foundation of Karachi’s activists since 2007. T2F, described as a community space for open dialogue.

The murder has been widely condemned by people from all walks of life.