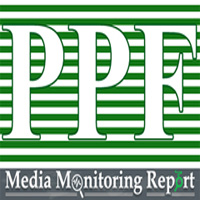 While speaking at a program “Meet the Press” at Lahore Press Club State Minister for Information Maryam Aurangzeb said that incumbent government is giving due attention to safety and training of journalists.

She further added that draft of legislation for protection and capacity building of journalists was being prepared and it would be shared with all the press clubs and media houses before its approval. Abb Takk, ARY News, Capital TV, Dunya News, Neo News and News One aired tickers on November 18 while different newspapers including The News, daily Express, daily Nawa-i-Waqt on November 19 also published the news story.

In a meeting with the delegation of All Pakistan Newspapers Society, Information minister Ms Aurangzeb expressed her resolve and assurance to freedom of expression and urged media to continue playing its vital role in further strengthening democracy and fostering democratic values and norms in the society.

The case has been fixed for November 28 and the respondents have been asked to submit their statements and appear in person. While court also observed that the news report was totally fake, baseless and a fabrication of the imagination of the reporter.

Rift on DTH auction: Notice to TV channel and drive against Indian content

Cable operators staged a protest outside the Pakistan Electronic Media Regulatory Authority (PEMRA) headquarters after the press conference of authority’s chairman and demanded to delay its auction of Pakistani Direct to Home (DTH) service.

Cable Media Association President Sohail Iqbal said the launch of DTH was not acceptable since the cable operators had recently invested billions of rupees to convert the analogue cable system into the digital one.

In other story reported by Geo News on November 15 and Business Recorder on November 16, a meeting was held between Pakistan Broadcasters Association (PBA) and Cable Operators in Islamabad in which cable operators’ representatives informed PBA office-bearers about their failed meeting with the Chairman PEMRA on cable digitization and DTH. While PBA assured the cable operators that it will try its utmost in helping to resolve the issue at the earliest.

While addressing press conference leaders of Indus Cable Operator Association demanded PEMRA to postpone the auction of DTH service. The press conference was reported by daily Intekhab and daily Pakistan on November 17.

PEMRA issued a show cause notice to Sabzbaat television for airing Indian content in its transmission.

In a letter PEMRA General Manager Operations of Islamabad wrote that according to the daily transmission report from November 4 to November 12, it was confirmed that the channel had being airing English movies dubbed in Hindi language Indian songs daily in complete violation of PEMRA laws. The News on November 18 reported the story.

PEMRA shortlisted 12 companies to participate in the bidding process for DTH service licence to be held on November 23. Chairman PEMRA Absar Alam said that three licences would be given auctioned in open bidding, he shared these views while addressing to a press conference.

Alam said that operation against use of illegal Indian DTH would continue till it was completely eliminated. Different television channels and newspapers including Abb Takk, ARY, Aaj News, Capital TV, Dawn, Geo, Neo, News One, Dunya News on November 14, 15, The Express Tribune, The News, The Nation, Dawn, Business Recorder, Balochistan Express, daily Jang covered the press conference on November 15 while daily Jang and Business Recorder also published a picture of Chairman PEMRA while he was addressing a press conference.

In other stories reported by The News, The Nation, Business Recorder, Pakistan Today on November 18 while The Express Tribune on November 19, PEMRA is looking for the biggest ever investment in electronic media through auction of founding and operating the Direct to Home (DTH) distribution services in Pakistan on November 23.

A PEMRA official told the bidding of DTH licence will start from Pakistan rupees 200 million; however $150 million foreign investment would be brought in Pakistan directly through the DTH service.

Senior party leader and lawyer Hamid Khan submitted a letter to the Chairman of Pakistan Tehreek-i-Insaf (PTI) Imran Khan and requested to recuse him from pleading the Panama Papers case and said that media campaign made it impossible for him to continue representing the PTI in Supreme Court.

The News on November 16 reported that the inquiry committee formed to investigate the story published in Dawn newspaper on October 6, has officially started working from November 16. Committee has summoned former federal minister for information Pervez Rasheed to record his statement. The committee would also summon Cyril Almeida, who had reported the story.

According to the officials of the Press Council of Pakistan (PCP), the committee formed to investigate the source behind the planted story may fail to complete its job within the given 30 days, as rules do not allow the investigators to question the concerned journalist or the newspaper staff.

According to Section 14 of the PCP Ordinance 2002, “The council or the commission shall not compel a publisher, an editor or a journalist to reveal the source of information.” The Nation on November 16 reported the story.

Members of the journalist community discussed the role of the Pakistan Press Council (PPC) in the freedom of the media at Karachi Press Club. Dr Tauseef Ahmed Khan hosted the event and said in the last 15 days some important issues had come to the front regarding freedom of the press followed by news leaks.

While journalist Khurshid Tanveer, who participated in the council meeting, added that the issue should be seen in light of Article 19 (a) of the constitution of Pakistan. The meeting was reported by Dawn and daily Jang on November 18.

Eminent journalist and human rights activist I. A. Rehman while addressing a seminar on challenges to freedom of press said, “If there are security issues then there should be more freedom of expression, because putting restrictions on people means you will be taking decisions with a limited mindset.” reported by Dawn on November 16.

Chief Justice of Lahore High Court Mansoor Ali Shah has rejected the plea against investigation committee formed to probe the News leaks matter. Secretary General of Pakistan Awami Tehreek Khurram Nawaz Gandapur said that the formation of investigating committee is not right as it is the matter of national security so the commission should be formed under Army Act while court considered the plea illegal. Daily Express, daily Dunya, daily Amn, daily Intekhab on November 17 reported the story.

Britain’s media regulator, Ofcom has stated that ARY News has made malicious and false allegations against Pakistan’s Minister for Kashmir Affairs Chaudhry Barjees Tahir. The media regulator made the verdict while acting upon a complaint made by Sakib Barjees, son of Barjees Tahir.

On January 26, 2016 channel in its programme ‘Kab Tak’ discussed the alleged corruption amongst government appointed land agents who keep registers of land (or Patwaris) in the Nankana district of Lahore in Pakistan and their links to government ministers from the Pakistan Muslim League Nawaz. The reporter of the programme Asad Kharal made various comments on Barjees and blamed him of being involved in fraud. On November 15, The News and daily Jang reported the story.

The Express Tribune on November 14 published an article written by Kamal Siddiqi with the title “A bill for journalists” in which the writer has discussed the bill for the safety and protection of journalists which according to state minister for Information will be ready by November 20.

The writer mentioned, the bill that government is going to pass is not new one but it was introduced in 2011 by Professor Khurshid Ahmed of Jamat-i-Islami and 21 other senators.

Siddiqi highlighted many steps included in the bill for the safety and security of journalists but there is also one controversial clause in the bill which states that in case of ‘national security’, Supreme Court could ask about the sources of information. This clause according to the writer has given the bill a new life after the change of Information minister.

The Express Tribune on November 18 published an article with the title “Who is responsible?” written by Mohammad Ali Babakhel. The writer highlighted the slapping incident of anchorperson by FC (Frontier Constabulary) personnel. The writer criticized both the parties and said the incident happened not only because of poor professional capacity of two individuals but it also represents institutional deficiencies as well. Both the sides should be given benefit of doubt as it seems unintentional on their part.

A circus-like atmosphere has been created and TV studios have been apparently converted into artificial courtrooms where anchors, analysts and politicians appear to be playing the role of judge, jury and assassin.

Elections of all unions of journalists in the country will be held on January 30, 2017 while the elections of Pakistan Federal Union of Journalists (PFUJ) will be held next year on March 30. The decision was taken in the Ad hoc committee meeting of PFUJ held under the supervision of Chairman Muhammad Riaz, daily Jang on November 20 reported the story.

Award winning photojournalist Azhar Hussain Jafri passed away due to a cardiac arrest. Jafri started his career with daily Musawat and also served as a chief photographer for daily Dawn. The News and Dawn published news stories while Aaj News also aired detailed news on November 18.

PPF monitored 174 news items in both newspapers and TV channels during the week. Majority of the news makers were 149 males, 18 females; while in seven news items gender of spokesperson was not mentioned.