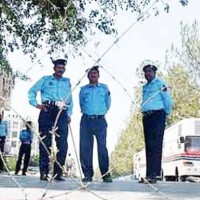 Police have completed the security audit and survey of 38 media houses and installed panic alert systems at 31 outlets to avert any untoward incident there.

Following the directions of Minister for Interior Chaudhry Nisar Ali Khan, various steps have been taken by Islamabad police to ensure fool proof security arrangements at media houses and these measures were reviewed here in meeting presided by DIG (Security) Sultan Azam Temuri.

The meeting held following the orders of IGP Islamabad Tahir Alam Khan reviewed the security arrangements at media houses which was also attended among others by SSP (Security) Mir Vais Niaz, PID officers and representatives of media houses.

It was told that the panic alert system has been installed at 31 media houses. This was done after conducting the security audit of 38 media outlets while 123 security guards have been given security training in a three-day program. In addition, a total of 59 security guards joined the rehearsal of firing.

Likewise, the meeting was told that security audit of 150 buildings have been completed and 530 bunkers have been constructed for guards deputed there for security purpose.

DIG (Security) Sultan Azam Temuri said that an SOP has been prepared for security of Islamabad and it has been divided into four clusters. He said that a total of 1723 guards have been given security training so far and this exercise would remain continue in next month.

Temuri said that the media is playing an important role in perspective of security situation in the country and the interior minister has categorically asked to ensure fool proof arrangements there. He said that media representative would share the security information after this meeting with owners of media outlets and complete coordination will be ensured with police in this regard.