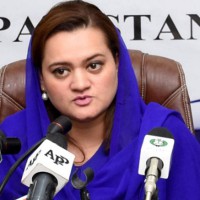 ISLAMABAD: Minister of State for Information and Broadcasting Marriyum Aurangzeb said that Prime Minister Nawaz Sharif has directed to take comprehensive measures for the safety and security of journalists and media workers. She said implementation of law should not be a story but it should be implemented. She said that recommendation of the committee headed by Chaudhry Ahsan Iqbal Minister for Planning and Development will be made part of the bill.

Participating in a dialogue on Safety, Security and Welfare of Journalists Bill organised by PFUJ at National Press Club in Islamabad on Monday she said all the stakeholders should participate in the process for preparation of the bill on protection and welfare of the journalists. She said suggestions from the media workers will be made part of the bill.

The minister said that protection and welfare of journalists is responsibility of the government. She said the government is considering different aspects of the bill.

Marriyum Aurangzaib said a Journalists Council will be constituted after the approval of the Bill for Safety, Security and Welfare of Journalists in order to ensure its full implementation. She said the draft Bill was generalized and circulated for the very purpose of getting recommendations from all sections of media and civil society.

She said recommendations regarding the Wage Board Award and Journalist endowment fund will be considered before finalising the Bill. She said that completion of the Wage Board Award is the legal duty which will be fulfilled. She said many suggestions have been included in the journalists’ welfare and protection billand new draft of the bill will soon be sent to the media houses.

The minister asked all the media groups and civil society representatives to submit their recommendations till 30th of this month so that it can be processed further.

Marriyum Aurangzaib said we want to include the voice in the bill so that problems of journalists could be addressed. She announced to provide the copy of the bill to journalists on next Friday.

While addressing the ceremony President Pakistan Federal Union of Journalists (PFUJ) Muhammad Afzal Butt said as the army personnel were martyred while fighting with the terrorists like this journalists were also martyred. He said the journalists had no personal enmity with anyone.