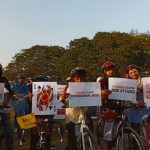 LAHORE: Lahore High Court Chief Justice Mamoon Rashid Sheikh on Thursday observed that restrictions could not be put on freedom of expression in any vague manner.

Senior lawyer and rights activist Hina Jillani made her appearance in defence of the march as the chief justice resumed proceedings in a court mostly filled with women lawyers and the activists.

Ms Jillani moved an application on behalf of several journalists, human rights activists, lawyers and academics and questioned locus standi of the petitioner, to agitate the matter before the court.

She also objected to the language used in the application against the march and termed it an attempt to malign rights activists striving for social and legal rights of women and transgender community in the country.

She said the applicants had participated in the rallies and public action for defending women’s rights, including the ‘Aurat March’ held in Lahore last year.

She argued that the applicants had a right of being heard by the court before any decision on the matter.

Advocate Siddique stated that he was not seeking a blanket ban on the woman march, rather was demanding the administration to regulate it within the limits of law and Islamic injunctions.

“The only issue I have [with the march] is objectionable placards held by the participants of the last year’s march,” said the lawyer. He also presented pictures of some placards before the court.

CJ Sheikh reminded the lawyer that the court would put his statement on record that he did not want a ban on the march.

Ms Jillani pointed out that the petitioner was also against the campaign for the march on social media.

She argued that the matter was between the marchers and the government. She said the activists lawfully sought permission from the local administration for holding a peaceful march and the police were supposed to provide them security as it did last year.

A lawyer on behalf of traders also opposed the march saying the business activities on The Mall were badly affected during the previous demo.

During the hearing, Chief Justice Sheikh snubbed a lawyer, Azeem Danyal, for interrupting arguments of Ms Jillani. The lawyer also exchanged harsh words with Advocate Siddique before the hearing was adjourned.

The chief justice directed both sides to file their replies by the next hearing and also sought reports from deputy inspector general (DIG) of the police’s operations wing about security arrangements for the marchers and regarding terrorism threat to the event, if any.

The law officers of federal and provincial governments were given time to file their reports by the next date.

CJ Sheikh regretted there had been irresponsible statements on social media regarding the previous proceedings in the case. He noted that the application by Mr Siddique had not been admitted so far as the court simply issued notice on it.

She said the youth of the country could not be restrained from expressing their feelings.