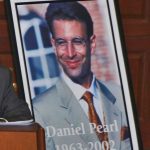 ISLAMABAD: The parents of The Wall Street Journal’s slain reporter Daniel Pearl has joined the Sindh government in challenging the Sindh High Court’s (SHC) April 2 judgement of overturning the conviction of Ahmed Omer Saeed Sheikh before the Supreme Court.

Senior counsel Faisal Siddiqui on Saturday moved an appeal before the apex court on behalf of the reporter’s mother Ruth Pearl and father Judea Pearl.

Earlier the Sindh government through Prosecutor General Dr Fiaz Shah had appealed before the Supreme Court with a request to set aside the SHC’s April 2 order of modifying the sentence of Sheikh to seven years rigorous imprisonment with a fine of Rs2 million. Sheikh is believed to be the mastermind behind the alleged kidnapping and killing of Daniel Pearl.

The Sindh government had expressed apprehensions that there was strong evidence that Sheikh along with co-accused might abscond.

Soon after filing of the petition, counsel Siddiqui in a statement said that the SHC decision to free the men involved in the murder was a complete miscarriage of justice. “It is a defining case for the Pakistani State and its judicial system, involving freedom of the press, the sanctity of every life, freedom from terror and the manifestation of a welcoming and safe Pakistan to the world. Rarely has any court case embodied and risked such fundamental values,” he said.

The SHC on April 2 had modified the sentence of Sheikh and acquitted three co-conspirators namely Fahad Naseem, Sheikh Adil and Salman Saqib, who were earlier sentenced to life imprisonment by the Anti-Terrorism Court (ATC), Karachi.

In February 2002, 38-year-old Daniel Pearl — South Asia bureau chief for The Wall Street Journal — was murdered in Karachi after he was kidnapped in January while doing a research on religious extre­mism in the city. Later a graphic video showing his decapitation was delivered to US Consulate. Subsequently, Sheikh was arrested in 2002 and sentenced to death by the trial court.

On Saturday Ruth and Judea Pearl pleaded through their joint petition that the high court erred in discarding evidence of the forensic expert of the Federal Bureau of Investigation (FBI) solely on the ground that the forensic expert had stated in his evidence that he was given the laptop, belonging to the Fahad Naseem on Feb 4, 2002, whereas the witnesses had stated in their evidence that the said laptop was recovered on Feb 11, 2002.

It is submitted that in the present case, the evidence of the forensic expert and his forensic expert report clearly prove that the said laptop was used for the sending of ransom emails, the petition pleaded.

Moreover, the evidence of the forensic expert is clearly corroborated by the evidence of the independent witnesses, such as PW (Prosecution Witness) Sheikh Naeem and PW Mehmood Iqbal, which proved that the internet connection given to Fahad Naseem was used for sending the ransom emails.

The high court even erroneously discarded the evidence of PW Zaheer Ahmed by declaring him a chance witness, even though his independent evidence supports the fact that the laptop was recovered. Therefore, in view of the strong independent corroboration, the evidence of the forensic expert and his forensic expert report could not have been discarded solely on the basis of minor contradictions in the dates of his examination of the laptop and the same was liable to be considered as incriminating evidence against Sheikh, the petition pleaded.

It is a settled principle of law that any evidence recovered pursuant to a wrongful arrest at an earlier date would still be admissible when it is incriminating, relevant and supported by independent evidence, the petition argued.

It is also well settled law that even though such wrongful arrest on an earlier date will be covered under the exceptions to the doctrine of the fruits of the poisonous tree. But even this limited doctrine is not accepted by the courts of the subcontinent who have taken a much broader view of evidential principles which is that the evidence even if illegally recovered would be admissible if it is incriminating and relevant and corroborated by other evidence, the petition said.

The high court also erred by holding that no evidence was brought on record by the prosecution to link any of the accused persons to the murder of Daniel Pearl, the petition argued, adding a bare perusal of the entire record would reveal that there was plethora of incriminating evidence, both forensic as well as oral, which proved that murder was committed and that all the accused persons aided and abetted the murder.

Thus, it is obvious and apparent that the high court judgement was erroneous since it was fundamentally based on misreading of the entire record.

The high court also held wrongly that the convictions and sentences awarded by the trial court to Sheikh and his co-accused could not be sustained on the basis of the standard of proof, meaning that the prosecution has not been able to prove the case against the accused persons beyond reasonable doubt and the benefit of doubt must go to the accused persons.

The petition argued that the high court had misapplied the burden and the standard of proof erroneously to the facts of this case despite the fact that there was substantial incriminating evidence, both oral and forensic, against the accused persons for the offences they have been tried for.

Secondly, the substantial incriminating evidence, both oral and forensic, cannot be discarded on the basis of explainable contradictions, misapplication of the criterion of admissibility and alternative speculative theories. And thirdly, the high court failed to note that this was a brutal murder as a result of international terrorism and the principle of the standard of proof as well as the benefit of doubt in cases of international terrorism have to be applied keeping in context that the nature and type of evidence available in such terrorism cases cannot be equated with cases involving non-terrorism crimes.