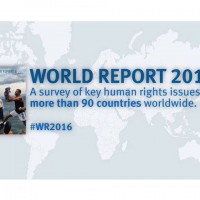 Journalists and activists in Pakistan faced an increasingly hostile climate in 2015 due to harassment, threats and violence from both the state and militant groups, according to Human Rights Watch report released on Wednesday.

In the 659-page World Report 2016, which has reviewed human rights practices in more than 90 countries, HRW says the government imposed new restrictions on free speech and funding of civil society groups in 2015 due to the security situation faced by the country.

Asia director of Human Rights Watch Brad Adams said Pakistan should not curb freedom of expression and association under the threat of extremism.

“Pakistan should reverse course and repeal or amend laws curbing freedom of expression and association,” he said.

“The government should never use the threat of extremist violence as a pretext to violate the rights of independent voices.”

Similarly, the report claimed, Taliban and other armed extremist groups threatened media outlets and targeted journalists and activists for their work.

Media was also deterred from reporting on or criticising human rights violations in the country’s counter-terrorism operations, it added.

According to the overview by HRW, since the Army Public School attack in December 2014, the government has responded with National Action Plan to combat terrorism, established military courts for terrorism cases and ended the unofficial moratorium on capital punishment, which led to execution of 327 people in 2015 alone.

Following the attack, thousands of Afghans living in Pakistan returned to Afghanistan or fled elsewhere due to subsequent backlashes.

Violent attacks and persecution of religious minorities from extremist groups were also reported.

The “Policy for Regulation of INGOs in Pakistan” required all international non-governmental organisations and domestic groups receiving foreign funding to register and obtain prior permission to carryout any activities and restricted their operations.

“Pakistan needs to fight terrorism, but denying its citizens fundamental freedoms and due process rights is an unlawful and extremely misguided approach.”