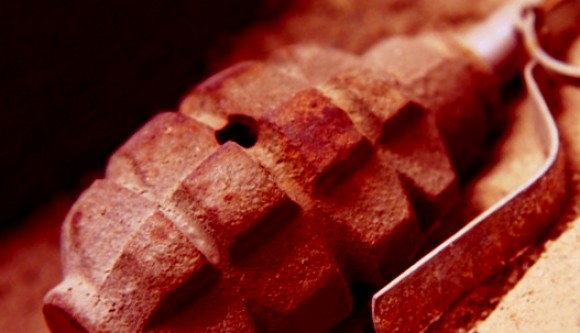 Two employees of a media house were injured on February 17, 2014 when two unknown men riding on a bike hurled hand-grenades at the main gates of two media houses in Karachi namely, Business Recorder Group and Nawa-i-Waqt. No one has claimed the responsibility of attacks.

Another bomb was discovered on February 18 in the parking lot of ARY television network. The attacks come within a month of the killing of three staff members of Express News, for which no one has yet been arrested.

The injured were Rasool Baksh, Guard and Abdus Sattar, Driver of Business Recorder who were rushed to a nearby hospital.

The attackers on a motorbike threw a low-intensity bomb at the guards’ check post outside the building of Business Recorder Group at around 7 PM, then went toward the Nawa-i-Waqt Group building and threw another crude bomb before fleeing the scene. Luckily, the second bomb did not explode and was defused by police. While the first bomb also damaged the main gate of the office and vehicles parked outside. An official of the Bomb Disposal Squad (BDS) said the bomb was a hand-made
cracker, prepared in a soft-drink tin and it contained around 250 to 300 grams of Aluminium powder as explosive.

In a separate incident of same sort, an explosive material found in the car parking of ARY TV channel’s head office in the morning of February 18. The bomb did not explode and was diffused by police.

The Coalition for Media Safety (COMS) strongly condemned the attack and called for effective steps by the government to ensure the safety of media organisations and personnel and for an end to the culture of impunity for those who resort to violence against media, which has made Pakistan among the most dangerous countries in the world for journalists.

Pakistan Broadcasting Association (PBA) condemned the attack in strongest term and demanded that the Government should immediately investigate the incidents, provide security to media and arrest those involved. These attacks are attempts to prevent media from performing its responsibilities.

The All Pakistan Newspapers Society (APNS) also condemned the attacks and expressed great concern over the increasing trend of attacks on media houses which suggests failure of law enforcing institutions. The APNS reiterated its demand that the government should provide foolproof security to the media houses and media men.