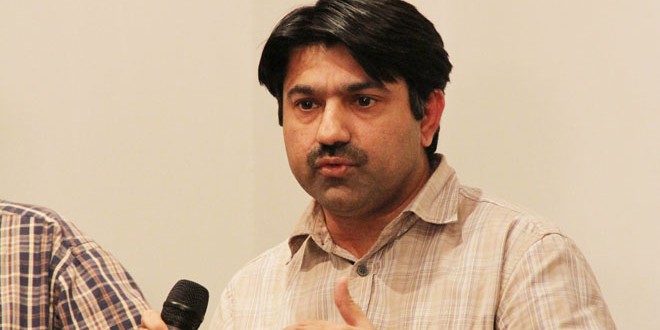 Adnan Rehmat, who has been working for better safety of journalists for two decades, talks about reporting ethics, attack on media and safety

Adnan Rehmat is director of media development at Civic Action Resources. With a background in journalism, he is a media development specialist focusing on advocacy, research and training. For the past decade he has been working, among other things, with media sector actors — from industry associations of owners, editors and journalists to political parties, governments and international actors — on developing and promoting policies and practices of professional journalism that reduce risks to the media and its practitioners and building alliances on combating impunity against media.

The News on Sunday: How do you look at the recent attack on Express News, the third in line? Are you satisfied with the response of the rest of the media?

Adnan Rehmat: The attack on Express Group is but the latest in a string of attacks and part of a fairly consistent pattern that has resulted in over 70 journalists killed in the past 6 years at the rate of about one every month. However, what separates this attack from those in the past is the accompaniment by a detailed statement issued by the Taliban claiming formal responsibility and detailing explicit reasons why the target killings were done.

It’s clearly meant to browbeat and cow down a media that is becoming more outspoken and starting to criticise the Taliban. The response of the media can be divided into two categories: (1) By working journalists – this has been vociferous, they’re rightly alarmed by the fact that they have been formally declared targets and the sense of extreme vulnerability that comes with being declared an enemy by an actor that even the state is too scared to take on, and (2) By media industry/owner associations — this is characterised by a deafening silence that betrays indifference and callousness, which probably is rooted in the firm knowledge that no editor or owner has ever really been attacked. This contrast in response is deeply troubling.

TNS: Do you agree that in this attack there are signals for the entire media? One media house is targeted to terrorise the rest?

AR: Make no mistake, this attack is not merely a signal — it’s a declaration of war against the media. Expect big casualties. Consider this statement from the Taliban after the attack: “We claim the responsibility of the attack on Express News van. The reason of the attack is that in the war of ideologies all media channels are acting as propagandist and as rival party. If the media doesn’t came [sic] to line and still act as a rival our attacks will continue. Our targets are not limited to Express News but all those media channels and their concerned personnel who are acting as propagandist and rival party. The media should conduct their activities under the rules of Islam.” We all know Taliban keep their word on attacks.

Large areas of the country are heavily restricted for media. So media needs to stop pretending it is working in a reasonable environment.

TNS: Do you think this could have been avoided if there was some kind of consensus among the media houses on how to report acts of violence, what language to use and how to appear to act neutral?

AR: In conditions when the state’s assuring presence and projected protection is rapidly vanishing for a growing list of groups in Pakistan, a major defence of the country’s media practitioners lies in stringent adherence to professionalism. Sure, codes of ethics for reporting exist in some media houses but not all, and barely any media house has a declared specific policy on protection and safety — a set of safety protocols that restricts risk taking. In a country riven by extremism, terrorism and an array of conflicts that they have to report, it is astounding the media houses — and the industry as a whole in Pakistan — does not prioritise this. The result: over 100 journalists and media workers either got target killed or were killed in suicide attacks and bombings in public since 9/11.

This inattention to a policy of professionalism is criminal as it encourages unnecessary risk taking by journalists and cheats them of life and limb.

TNS: Internationally, especially in the post 9/11 context, there is talk of Stockholm Syndrome among journalists. We too seem to have that among journalists on either side who are labelled as pro-Taliban and anti-Taliban. Do we not need an introspection of some kind? Should we not demand greater freedom to report independently in conflict areas both from the militants and the military?

AR: It is people’s right to be pro-Taliban or anti-Taliban — you can’t do much about it when the state itself is suspected of promoting this confusion for its dubious ends but when it comes to media taking positions, two things need to be considered: (1) Journalists need to be wary of being manipulated into dubious media agendas by both state and non-state actors who clearly put their interests before citizens’ welfare and use violence as policy or propaganda instruments, and (2) Large areas of the country are heavily restricted for media such as tribal areas, regions seen as operational or logistical havens for non-state actors but where the military rather than civilian authorities control access. So media needs to stop pretending it is working in a reasonable environment. Reporting terrorism has been the dominant story for the past decade in Pakistan — coinciding with the period that 85 per cent of media that exists today came into being. They have reported without rules and paid a heavy, heartbreaking price for it.

TNS: There appears a symbiotic and complex relationship between acts of violence that are defined as terrorism and media. To affirm its status as a psychological weapon, somebody rightly said that “terrorism is aimed at the watching people and not at the actual victim”. If there is need for some kind of censorship for a limited period, how far do you think can the media compromise on its freedom for the sake of the larger good of society (the broadcasters did agree on refraining from live coverage at one point)?

AR: I’m not a supporter of censorship of any kind. But with a media background stretching back over two decades, a big part of which has been spent on efforts for greater professionalism and safety of journalists, I’m acutely aware of the debilitating constraints the media in Pakistan has to contend with while reporting. I believe that no story or report is worth your life.

Most of Pakistan’s 18,000 journalists get paid a pittance, if at all, and mostly not even on time. They are not soldiers and they have not signed on to lay down their lives and so should absolutely assume no unnecessary risk that doesn’t have pre-agreed coverage. When they die, their media houses don’t even own them or pay their families compensation or even pursue justice for them with legal aid. So unless there are first policies, mechanisms and procedures in place that value their work and cover their risks, journalists should learn to say “no” to becoming part of the story and not succumb to the lure of higher ideals that their employers themselves don’t subscribe to.

TNS: You have talked on the social media about the need for media houses to get united. Can you elaborate what kind of structure do you have in mind? Is it going to be one for the entire media or separate ones for print and electronic? How will the smaller channels be controlled? I am sure we are looking it as a self-regulatory exercise.

AR: Pushed by Pakistan being selected as one of 5 pilot countries with bleak safety standards for journalists and high casualty rates, under a new UN Plan of Action on Impunity Against Media, under which the country will be rated by the UN, there is already a landmark Pakistan Coalition on Media Safety that has brought together media owners, practitioners, civil society, parliament and government to consider a national framework of safety for media. It is early days for them but some of the key measures they are mulling include appointment of a special prosecutor to investigate past casualties in media and future attacks; a set of consensus safety protocols to be endorsed and adopted by media houses for journalists that reduce risk taking and a law on safety of journalists.

TNS: Isn’t it time again to emphasise the need for training of some kind for the staffers into conflict reporting?

AR: Yes. Barely 8 per cent of Pakistan’s 18,000 journalists have received some kind of training on safety. There is a massive demand from journalists and press clubs but media houses are reluctant to fund them and other resources are surprisingly scarce to meet demonstrable demand. This is sad because if journalists will continue to remain under pressure and continue dying, an open society is not what we will have and no marks for guessing who will win the propaganda war that Taliban want — influenced with bullets and bombs aided by criminal inaction by the state and inexplicable hara-kiri by the media itself by refusing to be anything less than professional.