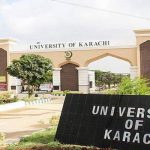 Attempts to keep media under the state control will harm democracy. The current state of journalism in Pakistan is not praiseworthy as on the one hand, there is severe censorship and on the other hand, journalists have lost interest in working on investigative stories. Moreover, owing to the free flow of information, it has become very difficult for the people to differentiate between facts and fake news.

These views were expressed by speakers on the first day of a two-day conference on ‘Equality, Diversity and Tolerance’ organised by the University of Karachi’s (KU) Department of International Relations (IR) in collaboration with the Pakistan Centre of Excellence (PACE) at KU’s Applied Economics Research Centre Auditorium.

The speakers said there was no law in Pakistan that allowed law enforcers to make people disappear. They were of the view that intolerance had grown in society over the past many decades and building a peaceful and decent society needed a counter-narrative which would also take many decades.

The speakers included Centre for Excellence in Journalism Director Kamal Siddiqi, rights activist Jibran Nasir and master trainer at PACE Sateah Anoushey Afreedi. PACE is a project of the Centre for Research and Security Studies, an Islamabad-based organisation.

The conference started with the address of IR Department Chairman Dr Naeem Ahmed. He said Pakistan was a multi-ethnic, multi-cultural and multi-religious country, and the most pressing issues in Pakistani society were religious extremism, radicalisation and terrorism.

During the first session, Sateah talked on the ‘Importance of Debate to Impart Critical Thinking to the Youth’. She spoke about the importance of debate and how it shaped our lives. Her focus was on how crucial it was for the students to understand the process of making convincing arguments. She stressed the importance of thoroughly researched and informed discussions.

Siddiqi enlightened the audience on the ‘Role of Media in Strengthening Democracy’. He educated the audience about the history of media censorship in Pakistan and how it negatively affected the credibility of media in the current age.

He said journalists were in these days feeling insecurity and taking less interest in digging out investigative stories while the state wanted the media to be its mouthpiece. He added that the controlled media did not report actual issues and in such environment, improvement within the system could not be expected. “This is why restrictions on the media are further weakening democracy in the country.”

“In the name of the so-called fifth-generation warfare, the state has developed paid and volunteered trolls on Twitter. They attack those who dissent with the policies of the state institutions.”

There is no check on the social media, Siddiqi said, adding that everyone seemed to be spreading information without checking facts and it created more challenges for today’s traditional media.

However, the traditional media is somehow responsible and reliable though in the next 10 to 15 years its medium would be changed, he said.The topic of Nasir’s speech was ‘State Rights vs Individual Rights’. He spoke about the fundamental human rights, importance of respecting them with regard to minorities and the violation of the national social contract between the individual and state on a daily basis.

He also discussed issues related to the control a state had on its citizens. “Even in a democratic state, your rights are decided before your birth and they are limited and sometimes also violated.” Nasir also explained how gender and class differences caused human rights issues in the country.