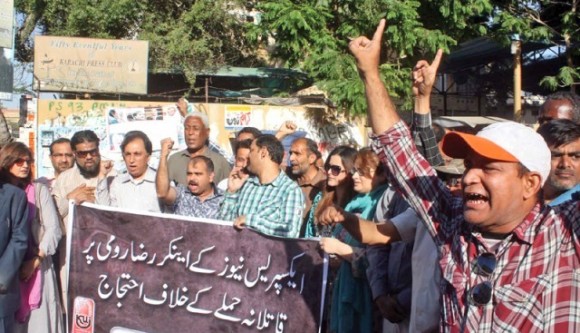 PESHAWAR / SUKKUR / ISLAMABAD / LAHORE / KARACHI: Journalists’ bodies called upon the International Committee of Journalists (ICJ) on Saturday to raise a voice in the United Nations for the protection of Pakistani media representatives, as the government has failed to ensure their security.

Unidentified gunmen opened fire on the car of Rumi in Lahore, injuring him and killing his driver. The attack took place just a few hundred yards away from the Express News office in Raja Market, which Rumi had just left after hosting his programme ‘Khabar Se Agay’.

“The voice of journalists cannot be suppressed with such violence. We will continue our protest until the suspects behind the attack on Raza Rumi are behind bars.”

KUJ President GM Jamali said, “Our helpless rulers should know that we can’t abandon our profession and we will continue to play our role in strengthening democracy.”

Addressing the protesters, KUJ General Secretary Hassan Abbas said the Express Media Group had been attacked by four times, but the government did not take any precautionary steps to curb the violence against the group.

On the call of the Rawalpindi-Islamabad Union of Journalists (RIUJ) and the National Press Club (NPC), hundreds of journalists assembled in front of NPC to show solidarity with Raza Rumi and the Express Media Group. They demanded formation of a special investigation committee to probe the attack.

In Lahore, journalists, lawyers and members also condemned the attack on Express Media Group and Raza Rumi. “He is one of the finest journalists in Pakistan and is a voice of reason,” said lawyer, columnist and author Yasser Latif Hamdani. Talking to The Express Tribune, he said the failure of the Punjab government to take these groups to task is the primary reason such lawlessness prevails.

Separately, news anchor Ajmal Jami said, “I wonder how anyone could attack a man who follows Data Ali Hajveri, who reads Khawaja Ghulam Fareed, and who is a follower of all the Sufi saints.”

The incident is a sad reminder of the threats faced by journalists like him who are promoting human rights, tolerance and understanding in Pakistan, they underlined. We extend our condolences to the family of Mustafa, the driver, and seek compensation for his family, they added.

In Quetta, journalists walked out from the coverage of Balochistan Assembly’s proceedings on Saturday to protest against the attack on Express Media Group. Balochistan Union of Journalists (BUJ) staged a loud demonstration outside the assembly building.

PFUJ provincial president Afzal Butt and National Press Club General Secretary Tariq Chaudhry along with BUJ President Irfan Saeed condemned the attack and demanded an investigation. This was the fifth attack on the media group but there has been no progress in the investigation, they complained.

In Sukkur, scores of journalists staged a protest sit-in at the clock tower roundabout. Responding to the call of PFUJ, Sukkur Union of Journalists representatives carried banners and placards condemning the attack. Journalists are being attacked and killed for telling the truth, which proves that our society is now ethically bankrupted, they claimed.

Meanwhile, the Khyber Union of Journalists (KHUJ), together with members of the Peshawar Press Club, joined in the nationwide protests. “This is not the first time that the same media organisation has been targeted, yet authorities have still not taken any action to protect journalists,” said Nisar Mehmood, the president of KHUJ.

Punjab Inspector-General of Police Khan Baig presented the initial inquiry report of the attack, according to which six assailants on three motorcycles attacked Raza Rumi.

As soon as the car reached a turn near Raja Market on main Ferozepur Road, two of the attackers opened fire from the rear, while four others – who were waiting in an empty plot to ambush the car – fired from the left.

The police collected 11 empty shells from the crime scene while 35 bullets pierced through Rumi’s car. DIG Investigation Lahore Zulfiqar Hameed said, according to witnesses, the suspects had covered their faces using handkerchiefs and so the police will not be able to draw their sketches. “It is too early to say but we suspect the involvement of two to three groups,” he said. On the motivation of these groups, he said, “Apparently, political and religious.”