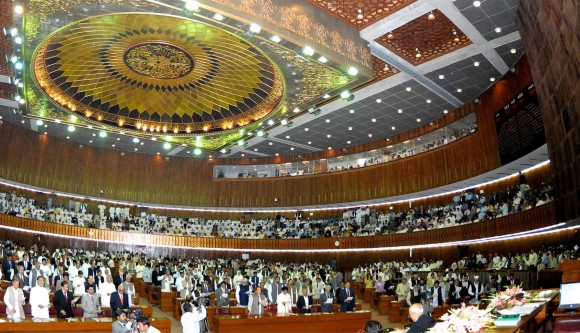 ISLAMABAD: The National Assembly passed a resolution on Tuesday to impose a ban on broadcast of “immoral programmes” on private and government-run TV channels.

The Lower House of parliament put off lifting the ban on video-sharing website YouTube over treasury’s opposition, which called for making necessary arrangements to block sacrilegious material on the website before lifting the ban. The House also adopted a resolution urging the government to take steps to improve and regulate education in seminaries after Minister for Religious Affairs Sardar Muhammad Yusuf told the House that the government is consulting the Ittehad-e-Tanzeemat-e-Madaris to bring reforms in seminaries.

On the private members’ day, the speaker disposed off major items on the agenda and allowed lawmakers of Jamaat-e-Islami to introduce their resolution which called for an immediate ban on airing of what they called were immoral programmes on private and state-owned TV channels.

The resolution was moved by JI’s lawmakers Sahibzada Tariqullah, Sher Akbar Khan, Sahibzada Yaqoob Khan and Ayesha Syed. However, the resolution moved by PPP’s Shazia Marri to lift the ban on YouTube was deferred by the chair when Minister of State for Parliamentary Affairs Shaikh Aftab Ahmad said the government wants to lift the ban on the website but after necessary safeguards have been put in place to avoid repetition of incidents which hurt the sentiments of Muslims.

Marri, who agreed to move the resolution on the demand of the treasury, said that around one billion people, including students, use YouTube across the world for research. She pointed out that YouTube was accessible through proxy websites and there was no point in maintaining the ban. Later, while submitting the resolution relating to seminaries, PPP MNA Nafisa Shah said a majority of the madrassas were playing a constructive role but many were also engaged in promoting sectarianism and extremism. “Science subjects should also be taught as a subject in religious schools,” she proposed.

Federal Minister for Religious Affairs Sardar Mohammad Yousuf pointed out that 8,000 seminaries were teaching science as a subject. He said that consultations were underway over the formation of a regulatory authority for the religious schools. Meanwhile, the lawmakers from across the aisle called upon the government to include attacks on polio workers in the agenda of peace negotiations with the TTP. They pointed out that the dangerous disease now only exists in three countries, including Pakistan, and 96 cases have been detected only in the last six months.

Speaking on the motion for eradication of polio from the country Qaumi Watan Party’s chief MNA Aftab Sherpao suggested the government include the matter of attacks on polio workers in the agenda of peace talks with the Taliban.