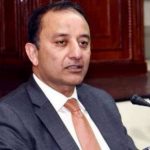 Islamabad: Pakistan Muslim League-N Senator Musaddik Malik got embroiled into a controversy after he said on national television that a certain journalist “should be set on fire” for not being respectful enough towards victims of the PIA plane crash tragedy. “This Tahir [the journalist] sahib, I don’t know who he is. Is he the head of some organisation? He came on television and said that our international image is being destroyed [by the revelation of deep-rooted issues in PIA],” the senator said in a video clip which has now gone viral on social media. “We should throw such an international image into the fire and we should set fire to Tahir sahib who came [on TV] and said something like this and made a mockery of all of us,” an enraged Malik could be heard saying. “Our plane crashed, should we not conduct an investigation and if there is a failure should we not go after whoever failed? Should we not do a root cause analysis?