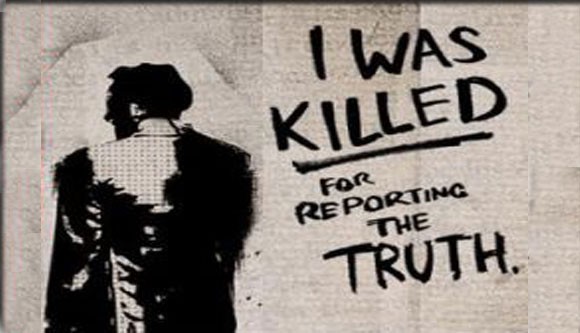 KARACHI: Terming Pakistan a most dangerous place in the world for journalists, speakers at a media workshop said on Sunday that 65 journalists had been killed in the country over the past five years.

Speaking on the first day of a two-day consultative workshop on ‘combating impunity: defending Pakistani media and journalist against attacks’ organised by a non-governmental organisation, the Intermedia Pakistan, they said that on an average one journalist was killed in every 28 days.

They called for a legal framework and a mechanism to effectively counter the impunity enjoyed by culprits and criminals and dealt with them sternly and quickly according to the law.

They said that the Reporters Without Borders, an international organisation, had ranked Pakistan as the most dangerous country in the world for the past two years — 2011 and 2012. They said the total number of journalists killed in the country over the past 12 years was 94.

Lawyer Asad Jamal said that over 60 journalists had been shot at a close range. He said Balochistan had topped the list as the most dangerous place for journalists in Pakistan, and 28 newsmen had been killed there in 12 years.

He said that 23 journalists were killed in Sindh in the same period. He lamented that only in the case of American journalist Daniel Pearl proper investigations were conducted and criminals were arrested, prosecuted and convicted.

The only other example in which some progress was made was the Syed Saleem Shahzad murder case in which a commission formed and it submitted a report with its recommendations.

He said that an environment of impunity had emboldened the criminals who were sure that they could get away with the killing of journalists. He said that similar situations in many countries had forced the United Nations to adopt a resolution calling upon the member states to formulate mechanism so that journalists could work freely, because each journalist killed or neutralised by terror was one less observer of the human conditions and that every attack distorted reality by creating self censorship.

He said the UN had also called for prevention mechanisms and actions to address some of the root causes of violence against journalists and impunity enjoyed by culprits. He said Mexico, where 57 journalists had been killed in the past 10 years, had taken a lead and set up a special prosecutor office when dealt with cases relating only to journalists.

But in Pakistan, he said in many cases even the FIRs were not registered.

Advocate Aftab Alam suggested that laws specifically dealing with violence against journalists should be formulated and hearings should be held regularly. He also suggested that a networking with the legal fraternity be established so that journalists, if and when attacked, could get legal assistance.

Representatives of the journalist community were of the view that in most of the cases the employing organisations, which had high stakes, as well as the state rarely supported them when they were attacked and they had been left defenceless, making them more vulnerable.

They criticised the role of the state and said that all witnesses in the murder case of journalist Wali Babar had been killed and no action had been taken so far.

Karachi Union of Journalists president G. M. Jamali said that laws were there and the real issue was how to make the state enforce the laws. He said that the wage board award for journalists was an Act of Parliament, but the state had not yet been able to fully implement it over more than 12 years.