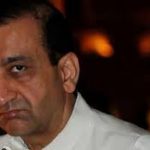 LAHORE: While Pakistan Tehreek-e-Insaf (PTI) government seems unmoved by the growing criticism over the arrest of Jang-Geo Editor-in-Chief Mir Shakil-ur-Rahman in a flimsy case, a veteran journalist has launched a campaign for his release by observing a hunger strike at the Lahore Press Club.

A feeble 65-year-old Azhar Munir, who has a long history of waging protest campaigns for the release of ‘prisoners of conscience’ inside and outside the country, is on a hunger strike now since March 29, 2020. He says he is determined to carry on the strike till he has the strength to do so.

Having penned 14 books on history and current affairs, besides dozens of booklets and pamphlets on the issues like human rights and civil liberties during a career spanned over four decades, Azhar says he has been receiving threats and insults from fellow journalists, the PTI supporters and from secret agencies and police

“I have been threatened of NAB [National Accountability Bureau] cases, arrest and dire consequences if I do not end the hunger strike. “But I am committed to my conscience, principles and not to Mir Shakil-ur-Rahman or the government agencies,” he said.

“It seems he has a strong soul in a frail body,” commented a fellow journalist Manzoor Qadir, sitting beside Azhar at a footpath outside the press club. Azhar, who has worked for a few years for the Jang Group in mid-90s, recalls that when the Nawaz Sharif government victimised the biggest media group of the country and nearly strangled its publications by stopping the newsprint supply in 1999, he had initiated a hunger strike camp at the Lahore Press Club, though he had already left the Jang Group and was opposed by many journalists and media group owners.

He said during the mid-90s, he campaigned for Myanmar icon for civil liberties and democracy, Aung San Suu Kyi, wrote hundreds of letters to the UN, Human Rights Watch, Amnesty International and other world bodies.

He told The News he campaigned similarly for a number of other ‘prisoners of conscience’ like the Israeli nuclear scientist and peace activist Mordechai Vanunu who, citing his opposition to weapons of mass destruction, revealed details of Israel’s nuclear weapons programme to the British press in 1986. Israeli intelligence agency Mossad lured him to Italy where he was abducted, drugged and secretly transported to Israel, convicted in a secret trial and made to spend 18 years in prison, including more than 11 in solitary confinement.

Azhar Munir said his father, Akbar Munir, was a noted poet of Persian and Urdu, a college lecturer and a friend of Allama Iqbal, Maulana Zafar Ali Khan, Syed Salman Nadvi and other leaders of Pakistan Movement. Azhar said Mir Shakil-ur-Rahman was arrested even in violation of NAB black laws, which clearly stated that nobody should be arrested at the complaint verification stage.

He said Prime Minister Imran Khan should have been more than thankful to the Jang Group, which had turned him into a celebrity, a captain, a social worker and a politician by highlighting his every move. But, he said, “Some people have the nature of a famous insect known for biting his own well-wishers.”

The veteran journalist says: “Come what may, I will not budge an inch on my stance. Mir Shakil-ur-Rahman’s arrest is totally unjustified. “He must be released immediately, and the rulers must avoid using NAB as a tool to silence the critics.”

Azhar Munir is not only a veteran journalist with a standing of decades in the profession but also a senior citizen who, under the prevailing circumstances when coronavirus has been declared a pandemic, stands most vulnerable to the virus. However, he seems least bothered about corona.

While responding to a question about his presence at the hunger strike camp when the entire country is facing a lockdown, Azhar said he never feared death and ever fought for his principles.

“I would rather die than surrender,” said Azhar Munir. He said that the incumbent government had adopted the method of suppressing the voice of critics though NAB, but the use of accountability body as a tool would not last long. He said the case against Mir Shakil-ur-Rahman was based on mala fide intentions and had nothing concrete.

He said there had already been many question marks over the NAB arrest procedure and the intent behind it was to target the individuals instead of fulfilling the requirements of justice. “I salute MSR [Mir Shakil-ur-Rahman] who stands firm at this critical juncture; he must be released immediately,” he demanded.

The writer of ‘Bainul Aqwami Waqiyat’ ‘Maadr-e-Millat ka Jmahoori Safar’ demanded the government show tolerance and adopt a democratic attitude towards its opponents. He said the PM should realise that criticism for the sake of improvement should be encouraged, instead of targeting the critics through state force.