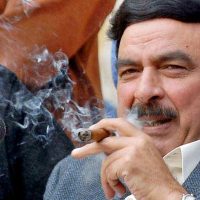 The Minister of Railways and leader of Awami Muslim League (AML) Shaikh Rasheed was accused of destroying the cellphone of a cameraman in the afternoon of August 22.

Aqib, a cameraman of Channel 24 along with a reporter, was present at Lal Haveli residence of Rasheed in Rawalpindi for the recording of an Eid programme. He then witnessed the incident where an aged woman wanted to meet the minister and ask for financial help but the security guards stopped her from entering the house.

The woman than started wailing and after hearing the clamor Rasheed came out of his house and after an exchange of some heated words the AML leader had the woman removed by his security.

The cameraman claimed that Rasheed snatched his cellphone and banged it on a concrete block because he was recording the scene. Talking with PPF the Bureau Chief of Channel 24 Aoun Shahi confirmed the incident.

In a video circulating on social media Shaikh Rasheed has accepted that a woman came to him for financial help, which he said he was not in a position to do. He said he asked his security guards to take her out from the premises but he denied any misbehavior with the woman or journalists and also denied damaging the cellphone.

The Rawalpindi Islamabad Union of Journalists (RIUJ) has strongly condemned this act by Shaikh Rasheed and his security guards and declared it an attempt to restrict freedom of expression. The members of RIUJ, National Press Club and Video Journalists Association demanded an unconditional apology and also gave 48-hour ultimatum to the minister. Otherwise, legal action will be taken against him.

According to local media, no complaint has been filed against the minister by the woman or the cameraman.