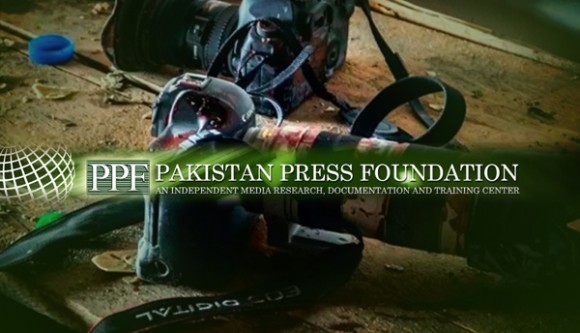 The Pakistan Press Foundation (PPF), a Pakistani NGO, has published a thought provoking report on Safety of media workers. The report is informative. It presents facts and figures to underline the gravity of the issue. The report also tries to pinpoint the major sources of threat to the media persons and the futility of the Commissions appointed to look into attacks on media persons. Being more than a collection of figures, the report also presents a raft of suggestions to deal with the problem.

Media plays a crucial role in an open society. Pakistan, however, has turned into the most dangerous county for media persons. In a ranking of the states that do not investigate and prosecute murders of journalists, Pakistan is placed in the unenviable category of the top-most ten. The report pinpoints eight sources of threat to the journalists: Militants, political networks, religious parties, ethnic groups, tribal and feudal lords and law enforcement agencies. The threats include killing, unjustly detaining, abduction and torture. We are told that since 2001, 71 journalists and media workers have lost their lives in pursuit of their duties. Of these 47 have been deliberately targeted and murdered for independent reporting while others were killed when covering dangerous assignments. In only two cases have the murderers been convicted by the courts

The report, however, fails to take note of certain dark aspects of what it calls a vibrant, independent and fairly free media. A streak of intellectual backwardness charcterises a fairly large section of the media community. This includes narrow-mindedness, religious and sectarian prejudice and chauvinism. Media being an industry, the media owners sell everything which is in demand, including religiosity. The way clerics were shown blaming sins and lack of adherence to religion as a cause of the earthquakes is one of untold examples. There are self-imposed taboos and a suppression of bad reports about multinationals and state enterprises that provide lucrative ads. There is need to take note of this dark aspect to make media really free.