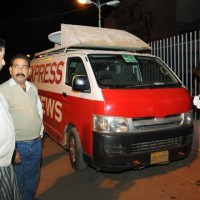 KARACHI: The journalists’ community denounced the killing of Express News staffers and called for countrywide protests against the deadly attack.

The Pakistan Federal Union of Journalists (PFUJ) said in a statement that journalists stood united throughout the country and would not be ‘bogged down by such cowardly acts’. PFUJ President Rana Azeem announced that protest demonstrations would be staged across the country on Saturday (today). The Karachi Union of Journalists (KUJ) would stage a demonstration outside the Karachi Press Club at 4pm on the instructions of PFUJ.

KUJ President GM Jamali said the union would also fully participate in a sit-in outside the Parliament House in Islamabad on January 18 and January 20. The sit-in has been announced by the PFUJ against the failure of the government to arrest the culprits involved in the killing of journalists and cameramen. The decision was taken at a meeting of the Executive Council of the KUJ on Friday, after the third attack on Express Media Group.

Journalist bodies and political and religious parties also condemned the attack and said that the provincial government has failed to provide security in the province.