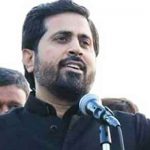 ISLAMABAD: New York Times and Washington Post have covered an incident that will add to government’s worry about its perception of media handling and freedom of speech that has increasingly been under the limelight. According to the Human Rights Commission of Pakistan (HRCP) and Council of Newspaper Editors, MPA Fayyazul Hassan Chohan made incendiary remarks, saying the popular anchor Hamid Mir was allegedly a traitor and also alleged the same for his father a prominent journalist at his time. Chohan has said Hamid Mir and Mohammad Malick made unfounded serious allegations based on personal agendas and he has send them a legal notice accordingly. NYT wrote regarding HRCP, “The statement accuses Chohan of endangering the life of Mir and his family. Mir, known for his criticism of corrupt officials, has been targeted in militant attacks the past.