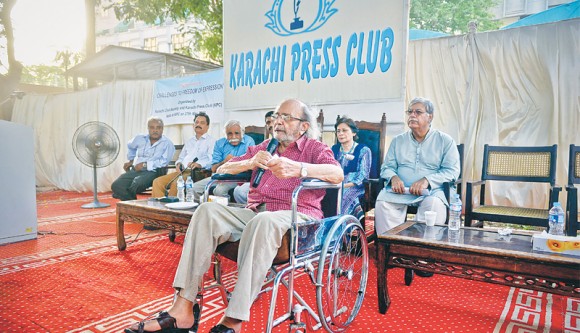 KARACHI: Speakers at a seminar titled ‘Challenges to Freedom of Expression’ at the Karachi Press Club on Tuesday evening expressed deep concern over threats being hurled at journalists, precipitated by the attack on journalist Hamid Mir and the ensuing media war.

The media wasn’t facing threats only from one side (the establishment) but it was multidimensional, including from the militant wings of political parties, said former editor of Dawn Saleem Asmi who chaired the moot.

Asmi sahib, despite not feeling well and finding it difficult to breathe, addressed the gathering briefly.

Social worker and human rights activist Mehnaz Rehman said journalists faced a perpetual death threat. She said they were killed, harassed and tortured by intelligence agencies, political parties and extremist forces like the Taliban. She said out of 34 journalists killed in the country, the murderer of only one could be brought to book. “The media is under siege,” she remarked and pointed out that the government hadn’t done enough to handle the situation. She said that according to a UN report Pakistan was the most dangerous country for journalists. Senior columnist and anchor Raza Rumi was attacked; luckily he was not wounded but his driver died. The Taliban had already put his name on their hit list that came out in February. Similarly, an Express News journalist Jamshed was attacked twice, as was the group’s coverage van.

‘Some channels are speaking the language of their owners … and journalism will be the only casualty’
Ms Rehman said the rating competition among TV channels was an impediment in the way of serious journalism.

She added that the menace of sectarianism was also creating differences between media persons as they find it hard to stand shoulder-to-shoulder with each other. She quoted an incident in which an Ahmedi journalist, when he started writing for Baloch missing persons, received a call to warn him that if he didn’t stop writing on the subject, his identity of being an Ahmedi would be disclosed. The journalist had to flee the country, she said.

She said all the institutions commanded respect and that the army should be supported in its war against the Taliban.

In the end, she put forward three demands: media bodies and institutions make a code of conduct, working journalists share profits earned by their organisations, and there be no ban on any newspaper or channel.

Prof Tauseef Ahmed Khan said the absurdity of the situation where the government was saying that it would not shut down any media outlet, the Supreme Court hadn’t given any decision against any media house and yet the demand for the closure of Geo TV was coming from within media groups and no one was talking about bringing Hamid Mir’s attackers to justice.

Vice Chairman of the Human Rights Commission Asad Iqbal Butt said threat to journalists wasn’t a new phenomenon; it began when the Quaid-i-Azam was alive.

He argued that certain people were angry at the Hamid Mir incident and wondered what wrong had he said which caused such a furore. The agencies didn’t enjoy a good record, he mentioned, and touched upon the Asghar Khan case in which it was admitted that political parties were given funds. He feared efforts were being made to put curbs on journalism because of which lives of workers of Geo TV and Jang newspaper were in danger. The government should take action against those playing with religious sentiments, he demanded.

Media person Mazhar Abbas said the situation had come to a point where it appeared as if Hamid Mir shot someone instead of he himself being a victim. There was a time when media persons resisted efforts to gag media but at present voices from within their rank were demanding to shut down the channel as journalists were squabbling and calling each other names. The community that even a military dictator like Ziaul Haq couldn’t destroy had now weakened and that too by a single incident, he said.

The event was conducted by Akhtar Baloch.