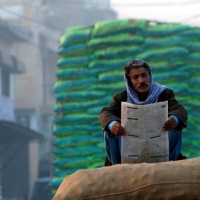 LAHORE: Paying glowing tributes to the journalist community, particularly those associated with print media, for playing a key role in guiding the other institutions of the state, Punjab Assembly Speaker Chaudhry Pervez Elahi has said media is free in Pakistan today.

“From the freedom movement till today, media, particularly the newspapers, has played a key role in combating the national challenges. Media not only showed path of reformation to the rulers but also created awareness among the people about their rights,” Elahi said on Wednesday

Elahi said media is the fourth pillar of the state and guarantor of the progress of the country. It also plays the role of a bridge between the people and those in power. “We are doing politics for a long time and enjoy deep relationship with journalists,” he added.

He said many organisations are working for promotion of journalism but the CPNE is the only representative body which includes prominent and senior journalists of the country who have always rendered best services through their professional journalism.

Elahi said he believed that media of Pakistan particularly print media is playing a highly responsible role by highlighting the need for reformation. “We have seen difficult times and we are also aware about struggle of the journalists. Journalism is very important for the progress of the country. Today media of Pakistan is free and the CPNE has an important role in ensuring this freedom,” he added.

The Punjab Assembly speaker said journalists of Pakistan are brave and patriotic who have given a befitting response to the enemies of the country. In the war on terror also the newspapers have done responsible journalism, he added.

“Because of the media, the stance of the government and the armed forces was appreciated by the people. In this regard also, the CPNE remained at the forefront.

“I salute the long struggle and efforts of the CPNE and assure its members that we will work shoulder to shoulder with them for freedom of the press and well-being of journalists,” he added.

Lambasting policies of the previous government, the speaker said it was because of wrong policies of former finance minister Ishaq Dar and premier Nawaz Sharif that the country is in difficulties now.

He said the media should guide the government in right direction. If the rulers’ intention is good then the country does progress. Prime Minister Imran Khan is working with a good intention and true spirit and the entire nation should support him. Imran Khan will fulfill all promises he made, he added.