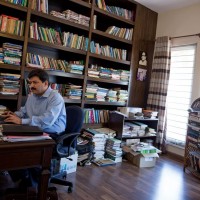 Islamabad: The most famous television journalist in Pakistan lives like a fugitive. Hamid Mir tells no one where he is going, how he will get there or where he will spend the night.

At Mir’s office, his curtains are always drawn. He uses at least two cellphones and, until recently, he rotated among three residences to obscure his precise location, even from friends.

Even with all these precautions, Mir is anxious and jittery, most of all when he gets into the back seat of his bulletproof car to drive to the television studios for his show, “Capital Talk.”

“Most nerve-racking part of the day,” says the 49-year-old father of two, clenching the grab bar above him on a recent morning as the driver careens through the city taking last-minute instructions on which roads to take. Mir ignores incoming calls from unknown numbers and swivels from side to side, watching traffic to see whether any vehicle stays too close for too long.

Mir is not just trying to avoid recognition; he also is desperately trying to avoid a repeat of what happened to him a little over a year ago as he was being driven from the airport to the Karachi offices of Geo Television, the network that employs him.

That day, a man standing along the road opened fire on his car.

When the first bullet shattered the rear passenger window and tore through his right shoulder, he actually felt relieved, he said. He was still alive.

But then he realized that four men on two motorcycles were chasing his car through the city streets, guns out.

Bullets pierced his body, including his right thigh, stomach and bladder. By the sixth impact, he began losing consciousness, and his mother, father, wife and children appeared.

“Their faces went around in my head,” he recalled.

The attack on Mir and the continuing death threats against him are emblematic of a broad backlash against transparency and independent journalism in many parts of the world.

Six out of seven citizens have little or no access to insightful reporting about their governments even though the Internet has made other types of information ubiquitous, according to organizations that monitor reporting internationally.

Worldwide, the last three years have been particularly hard on those who gather the news: An average of more than one journalist a week has been killed for reasons connected to his or her work, or about 205 journalists, according to the Committee to Protect Journalists, a nonprofit organization that investigates attacks on the media.

This year, at least 38 more have been killed. The dead include eight Charlie Hebdo journalists in Paris, a Brazilian radio broadcaster tortured and shot, an Indian reporter burned to death for investigating local corruption and a Japanese freelance photographer who was beheaded by the Islamic State in Syria.

Pakistan, with its volatile mix of shadowy security forces, internecine political battles, terrorist groups and criminal networks, is one of the most dangerous countries for local journalists outside of war zones, according to the United Nations and press freedom groups. Since 2001, 52 journalists have been killed here because of their reporting. Criminal charges have led to convictions in only two cases.

A magnet for hatred

To be a crusading journalist in Pakistan is to have many enemies.

In Mir’s case, some elements in the country’s most-feared intelligence agency, Inter-Services Intelligence, or ISI, despise him for his exposés of their double-dealings and secret influence on politics, he says. The Pakistani Taliban and local terrorist networks hate him for his outspoken criticism of their tactics and ideology and for his support of girls’ education. Various political parties revile him for finding corruption in their ranks and for his more tolerant view of India, which they would rather blame for Pakistan’s many ills.

The sunny view of press freedom in Pakistan is that it’s still evolving, moving forward, not backward.

Until 2002, when the government deregulated the media industry, there was only one state-run television station and a handful of heavily regulated radio outlets. Today, many of the licenses for the nearly 90 TV stations, 150 radio outlets and hundreds of newspapers are independently owned.

But media standards vary widely. Bribing reporters for favorable coverage is well-known, as are headlines based on rumors. Most large media outlets are funded by owners who don’t hide their strong political allegiances.

The media wing of Pakistan’s main intelligence service, the ISI, often exerts pressure on news outlets, according to former U.S. diplomatic and intelligence officials. It monitors the news, plants stories and intimidates reporters and editors.

The media wing’s larger goal is to keep the military’s influence on society obscured, its operations secret, and to promote its strategic interests, according to officials. This includes distancing itself publicly from the United States, even though its military has received billions in U.S. taxpayer money, records show.

Reports by Mir and other Pakistani journalists on the military’s secret support for the Afghan Taliban and the ISI’s involvement in CIA covert armed drone strikes deeply embarrassed the military establishment.

For a military that has directly controlled the levers of power three times in Pakistan’s history, these accountability stories only deepened its conviction to curb such journalism. International human rights investigations and U.S. State Department reports are filled with allegations of how hard it has tried since 2001.

In the Wild West province of Baluchistan, for example, security forces have been blamed by human rights advocates for the deaths and disappearances of many of the thousands of missing civilians. In that province, 13 journalists have been killed since 2008.

Mir produced more than 38 shows on the topic in the two years leading up to the attack on his life.

In 2012, a senior government official warned Mir to stop reporting on it: “Your life is under threat; you should stop raising your voice,” Mir quoted the man as saying.

Mir’s response: Another report on his show about Baluchistan’s missing.