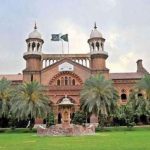 LAHORE: The Lahore High Court on Thursday sought a reply from the National Accountability Bureau (NAB) on post-arrest bail petition by Jang group editor-in-chief Mir Shakilur Rehman in a case of 54-kanal land allegedly allotted to him by then Punjab chief minister Nawaz Sharif in 1986.

Barrister Aitzaz Ahsan represented the petition before a two-judge bench and argued that the NAB violated its own policy and SOPs by arresting his client. He explained that the NAB had decided not to summon businessmen and issued SOPs to this effect during October 2019.

Mr Ahsan said the petitioner was a businessman and had been running a big media house. He pointed out that the petitioner’s wife had also filed a habeas corpus petition challenging the illegal arrest and detention of her husband.

The bench observed it will hear both petitions simultaneously as there involved similar questions of law.

NAB Special Prosecutor Faisal Raza Bokhari stated that the case against the petitioner was at inquiry stage and the bureau got his physical remand from the trial court the other day.

The judge asked the counsel to also attach remand order by the accountability with the bail petition.

The bench adjourned further hearing till March 30 and directed the NAB prosecutor to submit a reply and reasons for the arresting the petitioner.