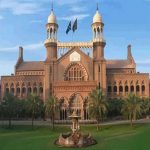 LAHORE: The Lahore High Court on Tuesday issued a notice to the National Accountability Bureau (NAB) on post-arrest bail petition by Jang group editor-in-chief Mir Shakilur Rehman in a 34-year-old case of 54-kanal land allegedly allotted to him by then Punjab chief minister Nawaz Sharif.

At the outset of the hearing, Justice Sardar Ahmad Naeem, head of a two-judge bench, asked the counsel for the petitioner if there was any fresh ground taken in the petition for release on bail.

The bench had dismissed two identical petitions against the arrest and for release of Mr Rehman on bail when he was on physical remand with the NAB.

To another query by the bench, he said then chief minister Nawaz Sharif, also a suspect in the inquiry, had not joined the investigation by the NAB.

After hearing the counsel, the bench issued a notice to the NAB for its reply to the bail petition by May 28.

The NAB had arrested Mr Rehman on March 12 when he made his second appearance before its investigation team. He was sent to jail on judicial remand on April 28 by an accountability court. The accountability court also held hearing of judicial remand on Tuesday, however, the jail authorities did not produce Mr Rehman in view of a government’s decision of not transporting under-trial prisoners to courts during the coronavirus lockdown.

An official of the jail presented a report to the court and stated that the suspect could not be brought from the district jail due to the precautionary measures.