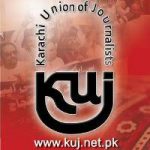 Karachi: The Karachi Union of Journalists (KUJ) has strongly condemned the mistreatment and harassment of the female journalists during the Pakistan Tehreek-e-Insaf’s 23rd Foundation Day rally on Sunday.

In a joint statement, the president KUJ Hassan Abbas, general secretary Aajiz Jamali and members of executive council said some miscreants tried to snatch the cameras and shoved and pushed the female journalists, besides forcibly removing the journalists and cameramen covering the PTI rally and the brawl between its two groups.

Expressing concern and strongly criticising the behaviour of the ruling party’s workers against the working journalists, especially the female counterparts, the KUJ demanded stern action against the members of the PTI for the shameful action. They also demanded the PTI leadership to tender apology for their workers rude behaviour and must ensure that such incidents are not repeated in future or the journalist organisations would be forced to adopt a unified course of action.