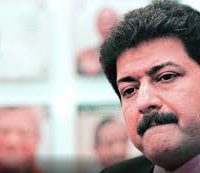 While dismissing a plea against senior journalist Hamid Mir for his alleged involvement in the kidnapping of deceased Khalid Khawaja, Islamabad Sessions Court on Friday said that the applicant has failed to present any evidence in the court.

The case was heard by Additional Sessions Judge Mohammad Jahangir. The Ramna police presented an investigation report to the court in the case. The applicant, the wife of Khawaja, failed to present any evidence in the case. Police stated that due to lack of evidence, the case against Hamid Mir was dismissed.

The court also accepted the request of the senior journalist to take back his pre-arrest bail plea in the case. The court approved the bail in lieu of bail bonds Rs 25,000 earlier.

The case was registered against Mir upon the orders of the Islamabad High Court in November. Khawaja was abducted from his home in Islamabad and his body was found from North Waziristan in March 2010.