Home » Featured » Freedom of expression must be protected in Pakistan: HRCP 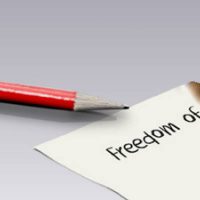 The Human Rights Commission of Pakistan (HRCP) is worried by the rapidly eroding space for freedom of expression in the country.

HRCP arranged a panel discussion titled, “Why is our freedom of expression being curbed?”. HRCP chairperson Dr. Mehdi Hassan said that Article 19 of the constitution of Pakistan even provides freedom to express but with six conditions.

“This is the role of political parties to work so everyone especially journalists could have level playing field for to write and report freely on issues,” he said.

Human rights activist Husain Naqi said space for freedom of expression is diminishing in the country. “What to say when Government itself tolerated the missing persons and there comes a time when the government itself is disappeared!” he said.

The government has made the toothless commission on finding the missing persons which could not hold anyone accountable, he said.

The right to know, dissent and free expression of ideas is essential to any democratic setup. Without the free flow of information and ideas, there can be no informed discourse between citizens, which will breed further divisions and intolerance within society.

In recent months a range of measures has been implemented to restrict Pakistani media’s voice, using methods like clampdowns, stoppages, manipulation, enforcement of the draconian, Prevention of Electronic Crimes Act 2016 and increasing threats and intimidation of journalists.

The recent 28-hour blackout of private news channels across Pakistan by the Pakistan Electronic Media Regulatory Authority, to cover up the failure of the government’s Faizabad operation from the public, was a disproportionate unilateral action taken by a government body to silence the media’s voice.

“These enforced disappearances have included social media activists, news reporters, bloggers, journalists and human rights defenders. The latest victim is Raza Khan, an Indo-Pak peace activist and convener of Aghaz-e-Dosti, who was picked up earlier this week.”

“All such actions are clearly having a chilling effect on civil society’s ability to exercise its freedom of expression for fear of the serious repercussions for speaking out freely.”

HRCP emphasizes that: “The government needs to stop ignoring the prevailing situation and resist from being part of any repressive measures which threaten freedom of expression .”

On the other hand, those responsible for expressing and disseminating information to the general public, especially mainstream media persons, need to act responsibly and ethically to ensure that an impartial and objective viewpoint is presented.

They must not use the platforms they control for personal agendas nor be swayed by attempts at intimidation and coercion.