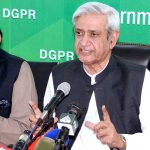 The Indian media is biased in reporting on Kashmir issue which shows its complicity with Hindutva hardliners, especially after abrogation of the Articles 370 and 35-A in the Indian-occupied Kashmir.

This was the opinion of speakers at the seminar ‘Post 5 August Reporting of Kashmir Issue with Special Reference to Indian Media,’ which was organised by Institute of Policy Studies (IPS) Islamabad in collaboration with Council of Pakistan Newspaper Editors (CPNE) and Riphah Institute of Media Sciences (RIMS).

The speakers were of the opinion that media is supposed to be the watchdog of democracy but Indian media is acting as the trumpet of the government. Its irrational aggressive posture only fuels war hysteria and the failure in observing peaceful journalism may lead the region to catastrophic consequences.

Syed Fakhar Imam was of the opinion that Pakistan has always stood behind Kashmir and will never leave the Kashmiris on their own in their freedom struggle against the occupation of India. He termed the Indian media’s coverage of the Kashmir issue a travesty of professional journalism. He also highlighted a shift in the way the international media is covering the Kashmir issue as it is not buying the Indian narrative.

Ali Muhammad Khan in his keynote speech deliberated on the negative role of the Indian media and said only a strong Pakistan can ensure resolution of the Kashmir dispute. He also said, “We need to exploit the fault lines that exist within the Indian society. In his opinion the youth, universities and media houses must understand their role and respond to the ongoing clampdown on Kashmiris by raising their voice.”

Not only the national media of India, but also the corporate-owned private media groups are reporting the situation in Kashmir with a partial approach, narrating only what fits the official policy and ignoring the reality. This was also observed by Sheikh Tajammul-ul-Islam who believed India is neither a democracy nor is its media free from state control. Islam said Indian media is master in propagating false information and fake news.

By fanning jingoism in India, the BJP-influenced media has the ability to jeopardize the regional peace by turning conflicts into war. This was observed by Dr Farhan Chak who felt the need for deconstructing the lies being spread by India with regard to clampdown on IoK through transparency and upholding journalistic values. He urged the need to challenge the dominant Indian narrative.

Executive President of IPS, Khalid Rahman said media is one of the most important tools of hybrid war and the media in India is being used to spread false information about the situation in Jammu and Kashmir. There is a complete blackout in J&K following abrogation of Articles 370 and 35-A, but the Indian government is trying hard to project a picture of normalcy. This warmongering attitude is not only confined to the government but the war-crazy Indian media is also playing its role in fueling hatred against Pakistan.

Dr Asma Khawaja said the public in India is living in a virtual information vacuum, and under this vacuum, they can project whatever they want. They don’t focus on development, mutual interests, etc. They only focus on warmongering to facilitate government’s warmongering, trying to influence public mindset.

Farzana Yaqoob spoke about the effective use of media by India to spread false propaganda, stating that their news, films and social media try to portray even their defeats as victories. In post-annexation of Kashmir, Pakistanis on social media did a good job in making the issue trend on social media, upon which India got many of Pakistani social media accounts banned.

Sardar Khan Niazi said while Prime Minister Imran Khan’s speech at the UNGA left an impact, it is important to follow it through effective activism and by keeping the issue alive internationally. The onus also significantly lies with Pakistani media, which needs to keep reiterating and amplifying the issue in its programmes, articles, columns and social media.