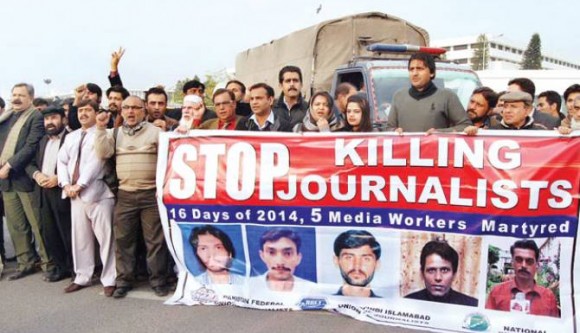 KARACHI: Protests were staged on Monday in different parts of the country, including Quetta, Lahore, Islamabad and Karachi, against the increasing attacks on journalists by Taliban.

Balochistan Union of Journalists (BUJ) has announced three-day mourning against the killing of a private TV workers and attack on the bureau chief of another private TV channel in Karachi.

Addressing the protesters, Balochistan Union of Journalists President Irfan Saeed and Quetta Press Club President Raza Rehman, speaking on the occasion, said a conspiracy was being hatched against freedom of speech and free press.

“The killing of three workers of a private TV channel and attempt to kidnap the bureau chief of another TV channel is part of the conspiracy,” they said and added journalists were being targeted in violation of the freedom of speech.

They announced three-day mourning in Quetta during which black flag would be hoisted on the building of Quetta Press Club. They said journalists would wear black bands on their hands during the duty hours. The journalists demanded an immediate arrest of those behind the killing of a private TV workers and attack on the bureau chief of another private TV channel.

Meanwhile, the Hafizabad Press Club took out a rally to protest the killing of three members of a private TV channel team in Karachi.

Led by Press Club Chairman Muhammad Yaqoob, the protesters marched from the club to Fawara Chowk, chanting slogans against terrorism. They termed the killings an attack on freedom of the press and called upon the government to arrest the perpetrators and protect journalists. They offered fateha for the departed souls of the deceased and expressed their sympathies with the bereaved families. They also demanded payment of compensation to their heirs.

They also condemned torture of some journalists inside the KPK Assembly and a ban on the entry of media persons in an official function in Lahore despite an invitation extended to them by the Directorate General of Public Relations.