Home » Featured » Journalists vow not to give in to threats 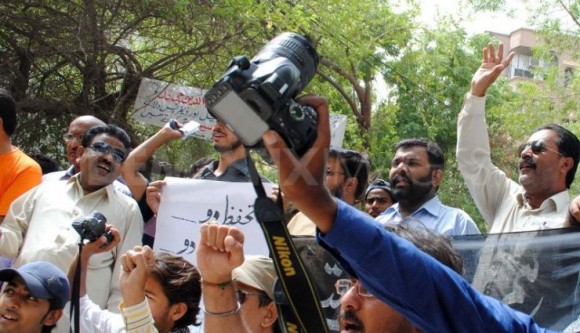 LAHORE: Journalist bodies, trade unions and civil society organisations on Monday took out a procession against “threats to the press club and some individual journalists” by outlawed Lashker-i-Jhangvi.

Carrying placards, they condemned life threats to senior photographer Azhar Jafri and his family as well as to the Lahore Press Club (LPC). The pointed that alleged Harbanspura unit of LJ had dropped some threatening pamphlets at the residence of Azhar Jafri at Journalists Colony. This was in addition to threatening wall chalking on the walls of his residence.

Later, identical pamphlets were also dropped at the Lahore Press Club, threatening to blow up the building.

Addressing the rally, Arshad Ansari, LPC president, said that the club had received threatening telephone calls and letters recently. “The police have duly been informed and the government will be held responsible for any individual or collective loss of life or property,” he said and demanded: “All those journalists under threat be provided protection.”

Other speakers included known journalists IA Rehman, Imtiaz Alam and PUJ President Rana Azeem. They maintained that the ulema should come forward to check the menace of sectarianism. They warned that if sectarian killings continued, no one would be safe in this country.

The resolved that no organization would be allowed to hijack hard-earned freedom of the press. Attack on any individual journalist would be considered attack on the entire community and profession.