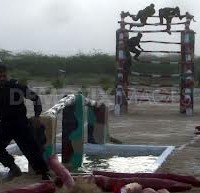 Karachi: How to remain safe while covering incidents in hostile situations, including acts of terrorism, explosions, firefights between law enforcers and terrorists, attacks on civilian or military installations or a hostage situation was the theme of an orientation training programme for journalists held at the Shaheed Benazir Bhutto Elite Police Training Centre Razzaqabad on Tuesday.

The daylong training for print and electronic media journalists, including reporters and cameramen, organised by the Special Security Unit (SSU) and dubbed as “Hostile Environment Awareness Training” (HEAT), covered many aspects of safety of media men, including live coverage of a terrorism incident, an explosion, a coordinated attack against law enforcers and reacting to and covering hostage-taking situations.

Orientation of weapons used both by law enforcers and terrorists, how to react in case of explosions, preventative and evasive measures during armed conflicts, and most importantly, provision of first aid to themselves, fellow journalists and common people in case of any casualty were some of the features of the training.

HEAT was organised by the Crime Reporters Association (CRA) in collaboration with the SSU. In the first batch, 50 reporters and cameramen from various print and electronic media organisations attended the training programme, while several more batches of journalists would be given the same training in the coming days.

“Your own safety should be a priority while reporting in a hostile environment” was the message given to the journalists by Major Muhammad Saleem, chief tactical officer (CTO) of the SSU, who conducted the training.

Introducing weapons being used by terrorists and law enforcing personnel in the city, Major Saleem said media persons should know about the weapons, their effective range and damage they can cause to human lives. He advised the reporters to keep themselves at a safe distance when small but lethal firearms are being used in a hostile scenario.

“In case of a hostage situation, you should know how to react, have panic alarm systems installed in your cell phones and try to convey the situation to the law enforcers while keeping yourself out of the danger,” the military instructor advised, and, holding a live demonstration, showed the attitude of hostages during a rescue operation by the special forces.

He also demonstrated how to escape from the boot of a car while their hands are tied with a piece of rope, and said little awareness, training and practice could help them to save their own lives as well as of others.

“Learning first aid and having a comprehensives first aid kit should be top priority of journalists so that they could help their fellows in a hostile environment.”

But the most important and interesting was the training of covering an attack on a police party with live ammunition and explosions and journalists were told how to keep themselves out of the range of the showering bullets, explosions caused by the terrorists and traps laid by the terrorists to attract the law enforcers and media persons so that maximum damage could be caused to them.

Shooting practice was another interesting segment of the training where reporters and cameramen were provided with an opportunity to learn the basics of various latest small firearms and to use them effectively in self-defence.

SSU chief Additional IGP Training Maqsood Ahmed distributed certificates among the media persons at a ceremony held at his office at the end of the training, and hoped that the journalists would use the training they acquired for the safety and betterment of their colleagues and themselves.

“This training and awareness is what we can do best for the media persons so that they could perform their responsibilities with more dedication and enthusiasm,” he said.

Senior Crime Reporter and CRA chief Noman Rafique lauded the SSU and thanked its chief, Maqsood Ahmed, and Chief Tactical Officer Major Saleem for arranging an “an effective training programme” for the journalists.