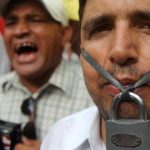 ISLAMABAD: Journalists held countrywide demonstrations on Tuesday in protest against an “undeclared censorship”, layoffs in media organisations and non-payment of salaries.

The demonstrations were held in Islamabad, Karachi, Lahore, Peshawar, Quetta, Hyderabad, Nawabshah, Sakrand, Daur, Badin, Qazi Ahmed and some other towns and cities.

Journalists from Islamabad and Rawalpindi gathered at the National Press Club where they were addressed by their leaders, including Nasir Zaidi, who was flogged by the martial law regime of Gen Ziaul Haq in 1978.

Mr Zaidi led the protest by holding a black flag to condemn censorship and forced terminations in media houses.

The call for the countrywide protests was given by the Afzal Butt group of the Pakistan Federal Union of Journalists (PFUJ).

The protesters criticised the Pemra’s decision to suspend the transmission of three TV news channels for airing the news conference of PML-N leader Maryam Nawaz.

Afzal Butt, president of his own PFUJ faction, said the nationwide rallies were the “beginning of a movement”.

“Around 5,000 journalists have lost their jobs over the past eight months and we believe it is a part of censorship,” he said.

The Karachi Union of Journalists held a demonstration outside the Karachi Press Club. A number of trade unions leaders, lawyers and civil society representatives also took part in the protest.

In Lahore, the Punjab Union of Journalists organised a demonstration outside the press club where speakers lambasted the government for placing restrictions on the media. They criticised owners of media house for sacking workers, cutting their salaries and even withholding their wages”.

In Peshawar, the Khyber Union of Journalists brought out processions and held corner meetings. Speaking at a protest outside the Peshawar Press Club, KhUJ president Fida Khattak decried the government’s “anti-media policies”.

In Quetta and other towns across Balochistan, journalists observed a black day to register their protest against curbs on the media. The Balochistan Union of Journalists hoisted a black flag at the Quetta Press Club.

In Hyderabad, journalists staged a demonstration outside the press club where union leaders called for resisting authorities’ attempts to gag the media.

The journalists condemned an incident in which some unknown men fired shots at the Talhar Press Club.