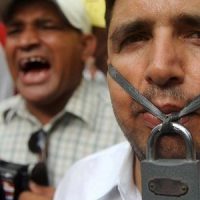 LAHORE: More than 50 journalists, including editors and columnists, media persons and media freedom organisation representatives in Pakistan and abroad have signed a petition against curbs on media in the country in recent days.

Initiated by journalist Beena Sarwar, the petition states that the signatories were seriously concerned over some recent actions.

The petition stated that media house managements, under pressure, are dropping regular op-ed columns and removing online editions of published articles and that one media house had even asked its anchors to stop live shows.

It also said that there was a growing trend of news that was “given” or injected into organisations, rather than allowing coverage of real news – incidents that were truly happening, but were either not covered or were taken off air. This was giving rise to an air of ‘self-censorship’ and resulting in violation of the citizens’ right to information.