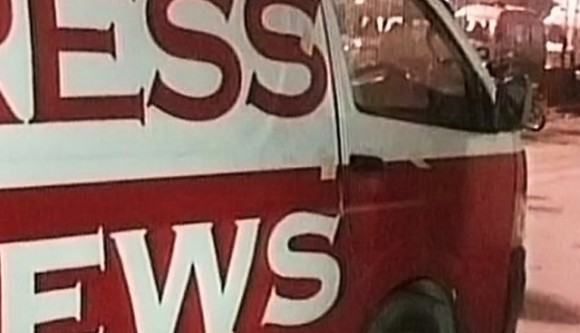 Protesters said it was a sorrowful incident, terming it a failure of the state. They urged the government to ensure security for all journalists across the country.

Senior political figures of the district, including Awami National Party leader Alam Zeb Khan, Member National Assembly Maulana Gohar Shah and several others participated in the protest, demanding the government to put special emphasis on resolving the issue of insecurity.

Journalists in Swat also staged a demonstration against the incident in front of Swat Press Club. The protest was led by Ghulam Farooq and Rashid Iqbal.

Participants sported placards inscribed with slogans of press freedom and with demands of assurances for security of journalists.

Speakers, at the occasion, said this was not the first instance when journalists were targeted, with many similar incidents being reported in the past. However, no arrests have been made in any of the cases, they claimed.

They also urged the government to take concrete steps for provision of security to all people working in the media. They later offered prayers for the deceased.

Journalists in Kohat district also held a protest rally led by Kohat Press Club President Zahir Khan Bangash. The rally started from Kohat Press Club and ended at Shuhada Chowk. Protesters had held placards inscribed with slogans against the government for its failure in providing security to journalists.

Demonstrators said Pakistan was a democratic country but despite that journalists were not being provided protection.