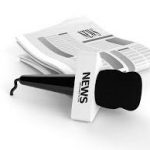 HYDERABAD: Office-bearers of the Hyderabad Union of Journalists (HUJ) (Dastoori group) staged a token hunger strike on Sunday against sacking of journalists and other technical staff from electronic and print media organisations and forced reduction in their salaries and other facilities.

They demanded immediate reinstatement of all sac­ked journalists and media workers. The also called for stopping such cruel actions against media workers.

They set up the camp outside the press club where they shouted slogans against injustices and unjust policies of media houses.

Political and religious leaders expressed solidarity with the protesting media workers by visiting their camp.