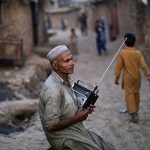 PESHAWAR: The Khyber Pakhtunkhwa government is likely to make functional five FM radio stations in the merged districts of the province to counter the narratives shaped by foreign radio broadcasts focused on the region, according to officials.

“Several foreign radio channels including some international broadcasters having local setups and some others based in border areas inside Afghanistan are beaming their transmission into Khyber Pakhtunkhwa in general and the merged areas in particular,” officials in provincial information department told Dawn.

They said that so far the attempts of the government to shape its narrative largely remained ineffective as local people mostly relied on foreign radio channels for their information and entertainment as those outlets made great inroads since the region plunged into vortex of militancy after the US invaded Afghanistan.

“These FM radios would be functioning within two months as accelerated efforts are underway to establish the radio stations,” Mukhtiar Ahmed, the secretary of information and public relations department, told Dawn.

He said government narrative would be disseminated to people, who till then were relying on the foreign media. He said that currently only two FM radio stations were working each one in Khyber and Miramshah, however, the duration of their transmissions was limited to two or three hours a day.

“I have planned to visit Miramshah within two weeks to personally look into the measures taken regarding fully operationalisation of the radio station there,” said Mr Ahmed, who took charge of the department few days ago.

The merged districts used to have four radio stations one each in Khyber, Miramshah, Razmak and Wana, according to the PC-1 for the establishment of the radio stations. The radio station in Wana was blown up by militants in 2006 whereas the remaining three were closed down in May 2013 owing to shortage of funds.

With the setting up of the FM radio stations, the efforts of the provincial and federal functionaries will be highlighted and the stakeholders will get an opportunity to air and share their opinions, views, grievances etc leading to a more open and consensus-based future for merged areas, according to the PC-1 of the project.

It states: “The directorate general of information KP would be in a better position to do the needful besides thwarting the negative propaganda initiated by hostile/anti-state elements against various government initiatives and developmental activities in the merged areas.”

The documents say that militant groups in erstwhile Fata successfully employed the use of illegally set up FM radio stations as highly effective propaganda tools.

This medium not only became the mouthpiece of the terrorists but it also directly challenged the writ of the state, indoctrination of the populace through venomous sermons projecting the so-called ‘jihad’ narrative, donation appeals and issuance of terror warnings further strengthened their network physically, socially and psychologically.

“Besides, radio stations located in Afghanistan near the border region are engaged in dissemination of negative propaganda against state institutions and they are trying to develop a hateful narrative,” say the documents.

Programmes would be aired in various local dialects to promote the ideology of de-radicalisation and offer a counter narrative to the anti-state elements, say the documents.