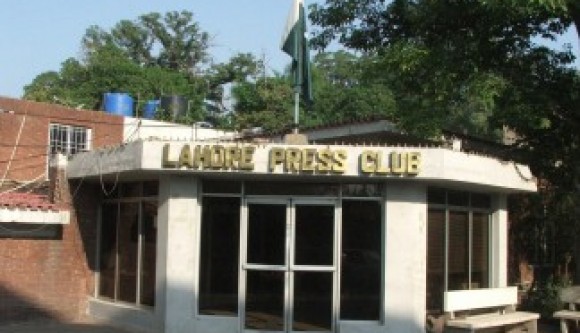 LAHORE: Protesting journalists outside the Lahore Press Club on Tuesday demanded the federal government introduce a journalist protection bill in the Parliament to provide them security.

The participants observed a symbolic hunger strike camp outside the LPC against the murder attempt on senior anchorperson Hamid Mir and possible action against Geo News channel. They demanded the Punjab government adopt proper security measures for Jang/Geo offices. They said all those persons involved in the attack on Hamid Mir should be arrested and punished.

Addressing the participants, Arshad Ansari said it was highly condemnable that 10 days had passed since the murder attempt on Hamid Mir but culprits had not been arrested. He said until attackers were not arrested, strike camp of journalist community would continue.

He said from April 30, members of all press clubs of the country would reach Lahore and the whole community would organise rallies and protest demonstrations for four consecutive days from May 1. Arshad Ansari also condemned in strongest words besieging of Jang/Geo offices in different cities of the country.

Others participants said conspiracies were being hatched on daily basis to curb Geo but the whole journalist community stands united with the channel to foil all such attempts.