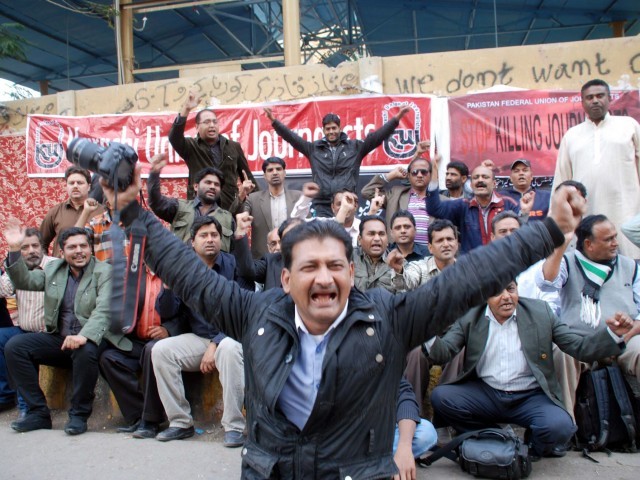 SUKKUR: Journalist fraternity across upper Sindh staged protest demonstrations on Thursday against the killings of journalists and the failure of the government to arrest the culprits.

The strike was in response to a call by the Pakistan Federal Union of Journalists. In Sukkur, scores of journalists, led by the Sukkur Union of Journalists (SUJ) president, Imran Sahil, and the general secretary, Perwaiz Khan, converged at the Clock Tower roundabout to stage a protest. The protesters observed a token hunger strike for three hours and shouted slogans against the government’s lax attitude.

Speaking at the occasion, SUJ members strongly condemned the journalists’ killings. They added that the first day of the new year had witnessed the murder of Shan Dahar in Badah. The members lamented that despite the formation of three different investigation committees, neither was any action taken against the doctors of Chandka Medical College Hospital nor were any arrests made.

On January 17, three employees of Express Media group were gunned down in Karachi and their murderers were still at large, they pointed out. The members were of the opinion that many innocent people were being killed on a daily basis throughout the country, but the government, it seemed, was not taking these killings seriously.

The protesters reasoned that journalists were working in unfavourable conditions to bring truth before the people and the government should provide them with adequate security. They also demanded the government provide compensation to the victims’ families. The journalist fraternity has announced to continue the protest until the culprits are arrested.