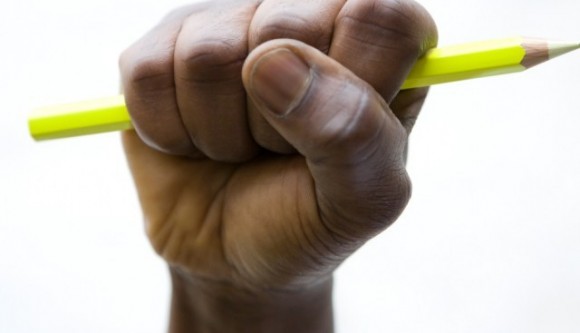 ISLAMABAD: The journalists organisations on Monday continued their protest against the unannounced curbs on Geo and ARY and newspapers Jang and The News and called for complete unity among the media outlets, both print and electronic, to protect the hard-earned freedom of expression.

The journalists gathered at the protest camps set up in front of all press clubs across Pakistan and held banners carrying slogans like “Freedom of Expression: Under Threat,” and “Not scared of threats!”.

The speakers deplored that Geo News was not restored completely and all the channels of Geo family were pushed back from their original numbers on the cable. They asked the government to undo these discriminatory steps. They slammed the act of making no-go areas for Geo Television and the Jang Group newspapers and stopping the cable operators from disseminating the information provided by news channels.

A large number of journalists from print and electronic media and members of the civil and members of the civil society organisations visited the protest camps and said they would start a countrywide protest campaign on the call of Pakistan Federal Union of Journalists (PFUJ) if unannounced curbs are not lifted and no-go areas not eliminated against Geo Television and the Jang group newspapers.

PFUJ president Afzal Butt while addressing the charged and protesting journalists in front of National Press Club (NPC) said Pakistan Electronic Media Regulatory Authority (Pemra) is shrinking employment opportunities for the journalists by taking television channels off the air so they cannot tolerate any situation in which the people belonging to the media industry are pushed to the wall to conceal wrongdoings of the state.

He said senior journalists affiliated with the print and electronic media can play an important role in giving a constructive direction to the media industry that has been serving the nation with commitment, dedication and pride.

NPC president Shehryar Khan said the media industry always played a pivotal role in safeguarding national interests and ideological boundaries of Pakistan and it would continue to do so in the face of challenges and threats, adding “No one can question the patriotism of journalists who always prefer national interests despite facing potential threats even to their lives.”

Rawalpindi Islamabad Union of Journalists (RIUJ) president Ali Raza Alvi said the government should make all out efforts to ensure that there are no no-go areas for any newspaper or news channel because any discriminatory act can undermine the freedom of press in the country.

RIUJ secretary general Bilal Dar said, “We hope the government would rectify the affairs of Pemra that should realise the importance of freedom of press and take steps in line with rules and procedures.”

President of Punjab Union of Journalists Waseem Farooq said “Pemra should follow the rules and procedures and decisions of the courts and if it does not do so then the incumbent government must take steps against the responsible persons,” he said.

In Quetta, President of Balochistan Union of Journalists Irfan Saeed while speaking at the protest camp said there should be rule of law in the country and every state institution including Pemra should work under the law instead of taking illegal steps to cause damage media industry.

Speaking to the protesting journalists Karachi Press Club president Imtiaz Faran said they would speed up their movement in the coming days because they seem that the government is paying no heed to their demands.