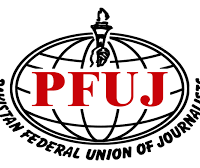 ISLAMABAD: Journalists of Rawalpindi and Islamabad continued their protest for a second day on Wednesday by setting up a pakora stall in front of the Parliament House to protest termination of services of journalists and workers by different media organisations.

Nuzhat Pathan, a Pakistan Tehreek-i-Insaf MNA from Sindh, visited the camp and held out an assurance to the protesters that she would take up the matter in the National Assembly.

The PTI leader said strong media was necessary for a strong country and promotion of democratic values.

Ms Pathan regretted the retrenchment of journalists and workers and non-payment of salaries to those media workers who were still working in some organisations and said that such a situation would weaken an important pillar of the state.

PPP leader Akhunzada Chattan expressed solidarity with media workers by purchasing pakoras from the camp and said he and his party had always stood for freedom of expression and free media.

Speaking on the occasion, Mr Butt said journalists were being sacked cruelly and this move of media organisations had created serious economic problems for media workers. He urged the government to address the issue.

Television anchor Saleem Safi suggested that managements of TV channels should cut salaries of anchors instead of sacking low-paid employees.