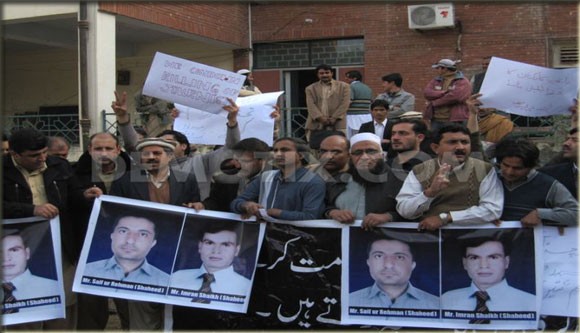 Three journalists working for Samaa television including Saifur Rahman Saif, Imran Sheikh and Mohammad Iqbal were killed in the Quetta explosions, which claimed around 100 lives. The demonstration was led by KhUJ, PPC office-bearers and other senior journalists.

The speakers on the occasion condemned the government and the owners of media houses for taking no steps for the protection of journalists. They said the camera and DSNGs of the media houses were insured, but no life insurance of the reporters and media workers could be arranged.

They demanded the media owners to adopt and implement standard operation procedures for the protection of journalists and save them from the mass killing in the name of “breaking news” and race for taking leads.

Several other journalists, including a Geo cameraman, with others were injured in the blasts. The journalists led by PFUJ founder member A Majeed Gill and BhUJ president Muhammad Ameen Abbasi gathered outside Farid Gate and chanted slogans against the killings. They were carrying banners and placards inscribed with slogans against the government. The protesters were wearing black ribbons and holding banners inscribed with slogans condemning the killings of journalists.