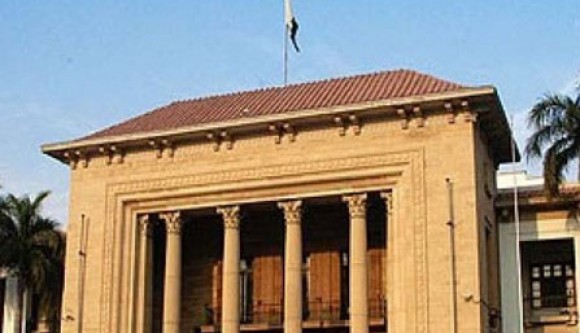 LAHORE: The journalist community stood by the Jang Group on Wednesday and boycotted the Punjab Assembly proceedings followed by warning of strict action by Law Minister Rana Sanaullah Khan to the cable operators illegally blacking out the Geo News.

The journalists from all news channels and newspapers unanimously boycotted the proceedings of the Punjab Assembly to show solidarity with the Geo News and condemned the elements making efforts aimed at its closure. They gathered at the assembly compound and raised slogans in support of Geo and against the cable operators.

Deputy Speaker Sher Ali Gorchani sent a four-member delegation comprising Minister for Human Rights Tahir Khalil Sindhu, Minister for Prisons Mian Abdul Waheed, Parliamentary Secretary for Information and Culture Rana Arshad and PPP’s Sardar Shahab-ud-Din to convince the protesting journalists to return to the press gallery. They joined the journalists in their protest and inquired about their demands.

The members were told that the journalists would not tolerate the attempts being made for shutting down the Geo News and demanded stern action against the cable operators suspending its transmission illegally.

Afterwards, Law Minister Rana Sana while speaking in the House clarified that the decision by the five private members of Pemra committee was their personal opinion and had no legal value. He promised that the provincial government would initiate strict action against the cable operators if they were suspending the Geo News transmission on the basis of an illegal decision.

He warned the cable operators that they did not have any right or authority to shut down or change the number of any channel unilaterally without seeking permission from the government. Any such step was to be considered illegal and action would be initiated against such cable operators, he added.

Sana stated the PML-N government had a clear stance that itbelieved in complete freedom of the media and was against shutting down TV channels which would cause unemployment among journalists. He stated that media freedom and continuity of democracy were interlinked and any effort to hamper the process would be countered.

Sana also strongly condemned the attack on Hamid Mir and demanded the Sindh government to immediately arrest the elements involved in the incident.Earlier, Sana told the media that the three Pemra members tried to do mischief but the official spokesman had expressed his disassociation from the move.

He added that the regulatory body had a total of 12 members, including five nominated by the government, who did not have any individual capacity and they could neither convene a meeting nor make any unilateral decision. He said action would also be initiated against them, if they had violated the Pemra rules.

He also criticised news anchors and TV channels which were creating anarchy by fanning intolerance.Sana also blasted Imran Khan for hatching conspiracies totrigger a clash among the institutions. He alleged that Imran was dancing on the tunes of foreign hands, which did not want stability in Pakistan.

He also said the PTI changed its policy with each passing day. Two days back, it wanted to show solidarity with Hamid Mir and forwarded a resolution in his favour to the assembly secretariat, but changed the policy afterwards and deliberately avoided it though it was on the agenda.

Meanwhile, the Punjab Assembly discussed the health department affairs during the Question-Answer session. It also passed ‘The Punjab Public Private Partnership Bill 2014’ amidst strong uproar and protest from the opposition demanding development funds for their constituencies.