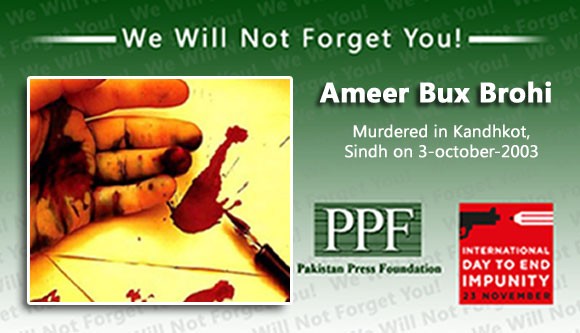 Barohi was returning from police headquarters in a jeep when three assailants opened fire on him, PPF says. Barohi was rushed to hospital but died shortly after.

Barohi, 27, was a correspondent for Kavish Television News and “The Daily Kawish,” the largest Sindh-language daily newspaper in Sindh province. While the motive for the homicide was unclear, local journalists believe it was in reprisal for Barohi’s reporting on sensitive local issues, notes CPJ. The killing provoked demonstrations throughout Sindh province by journalists who called for a full inquiry into the murder.

CPJ says Barohi is the second journalist killed in Sindh Province in the last year. On 20 October 2002, Shahid Soomro was shot and killed in Kandhkot, apparently in reprisal for his reporting on abuses committed during the 10 October general elections. Soomro was also a correspondent for “The Daily Kawish,”