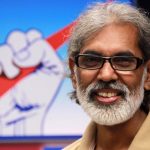 Pakistan Press Foundation (PPF) condemns the detention of senior journalist Waris Raza and welcomes his safe release. We are alarmed by yet another incident of a journalist being picked up without warrants and being held for hours. It is an alarming trend being used to intimidate the media in the country and to silence voices holding power to account.

According to Dawn, Raza, who works as a columnist for the daily Express and has worked on press freedom issues in the country, was taken by “law enforcement agencies” personnel from his home in the Sahafi Colony in Karachi early on September 22. He was released in the evening.

Speaking to PPF, Raza said that some officials in Rangers uniforms and some in civilian dress came to his house in four vehicles at around 2:30am. He said that first they took his wallet and mobile phone and confirmed his identity. He was then taken to an unknown location where was kept blindfolded.

Raza said that they put up his Facebook posts and a column for Express and asked: “ Are you against the hybrid system, is it really that bad?” He said that he responded by saying that he writes under the rights obtained under Article 19 of the Constitution of Pakistan, adding that no one can stop the voice of the truth.

The journalist said that he was also asked why he was against the Pakistan Media Development Authority Ordinance (PMDA) in response to which he said that the PMDA was against constitutional rights and could not be accepted.

Waris said that during his ordeal 15 different people asked him one question in what he said was an effort to deviate him but he continued to answer all their questions with a present mind and the officials responded saying: “You are a brave man but think before speaking about the state.”

The columnist, who recently compiled a book by the Pakistan Federal Union of Journalists about the union’s 70 year struggle for press freedom, said that those who detained him dropped him at the Mobina Town Police Station from where he was able to reach home safely. He said that the prompt response and pressure by his daughters and journalists bodies led to his release.

“We have to fight with the dangers, the paths of success open with dangers. Write consciously and stick to your word,” he said offering advice to other journalists, adding that he would soon take legal action on the basis of the recently passed journalists’ safety and protection bill and will set an example for others.

PFUJ President Shahzada Zulfiqar and Secretary General Nasir Zaidi said that “at this moment every voice for media freedom and freedom of expression was being suppressed”.

“If the government thinks that arrest of some persons and registration of cases would pave the way for legislation of draconian laws, it is their illusion,” they added.

Meanwhile, the Karachi Union of Journalists (KUJ) also condemned the detention. KUJ President Nizamuddin Siddiqi and General Secretary Fahim Siddiqi were quoted saying: “His arrest is a matter of concern and the KUJ considers it an attack on media freedom.”