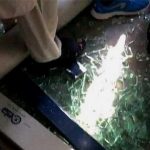 KARACHI: The administrative judge of the anti-terrorism courts on Monday remanded 13 suspects to jail for their alleged involvement in the attack on Geo News and Jang Media Group’s central offices in Karachi.

The offices were attacked on Sunday by a violent mob, enraged over a video snippet from a television programme that had reportedly hurt their sentiments, but for which an apology and a clarification had already been issued by the media house and the anchor.

According to the video recordings of the incident, charged protesters who had gathered nearby became violent and broke a walkthrough gate installed at the entrance of the building, besides smashing the entrance door. Receptionists as well as other staff inside the building were roughed up and chairs were tossed around, the footage showed.

At the outset of the hearing, the investigation officer produced the suspects before the administrative judge and sought their custody on physical remand for 14 days for interrogation. The IO said that the alleged ringleader of the attackers, Mushtaq Sarki, was still at large and the suspects were needed to be interrogated to trace his whereabouts.

The judge, however, turned down the police request and sent all the suspects to jail and ordered the IO to produce a charge sheet on the next hearing. The FIR was registered under sections 147, 148, 149, 324, 342, 427 and 506-B of the Pakistan Penal Code read with Section 7 of the Anti-Terrorism Act at the Mithadar police station.

Though 150 to 200 attackers were nominated in the FIR, the police arrested 13 of them following registration of an FIR at the Mithadar Police Station on the complaint of Geo News and Jang’s security supervisor.

Multiple sections of Anti-Terrorism Act, attempt to murder and damage to property were also included in the FIR. The FIR mentions that the miscreants continued to raise slogans to shut down the channel’s transmission and raised provocative slogans to kill the staff and the management of daily Jang and Geo News.