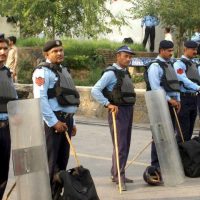 Islamabad police on Saturday told a sessions court judge that its officials had merely “stopped” a group of journalists from marching towards the Red Zone on World Press Freedom Day rather than manhandled them, as alleged earlier.

On World Press Freedom Day, observed on May 3, a group of journalists had marched towards Islamabad’s D-Chowk to protest restrictions placed on the media.

They were, however, stopped and allegedly manhandled by police posted in the area. After reports of the incident began circulating, Chief Justice Mian Saqib Nisar had taken suo motu notice of the case and ordered sessions judge Justice Sohail Nasir to investigate the allegations made by the journalists.

When asked if the policemen present on the site that day had been in contact with their seniors, the SHO responded in the affirmative, saying that “the high command had ordered that nobody be allowed to go [towards the Red Zone] since Section 144 had been imposed”.

He added that the rally was allowed to move forward after the deputy commissioner (DC) issued permission.

The sessions judge inquired what the journalists who attended the rally had carried with them. SHO Awan said that the demonstrators had been holding placards with slogans concerning press freedoms.

The judge then asked the journalists if they had asked the Islamabad DC for permission. He was told by one of the reporters, who had attended the demonstration, that the DC had called him after being messaged through WhatsApp.

The reporter further alleged that the rally was “intercepted” by SP Niazi. He claimed that the police suspected them of trying to cause a disturbance, when they had only meant to raise the problems being faced by the journalists’ community in Pakistan.

The SP, who was present at China Chowk, told the sessions judge that the journalists were unable to produce written permission for the rally when asked.

He added that the officials had asked SSP Najeebur Rehman for directions and were told to contact the capital city administration.

Police and journalists submitted evidence, including video footage and wireless logbooks, to the court. Justice Nasir will resume his inquiry on May 14.

An earlier report prepared by Islamabad police had held the capital administration responsible for the manhandling of journalists.

The report said, “no senior representative of the ICT [Islamabad Capital Territory] administration arrived to negotiate with the agitating journalists”.

The report had recalled that around 35 media persons led by a DawnNews TV reporter had gathered outside the press club and announced their march towards Parliament House in the Red Zone.

Later, about 50 journalists tried to remove barbed wires and barriers “in order to enter the Red Zone forcibly”. SP Niazi along with a police contingent reached there and tried to stop them.

Later, the rally crossed Express Chowk and staged a sit-in there. The protesters also tried to manhandle police officials, the report had alleged.

An hour later, the deputy commissioner had reached the spot and allowed the journalists to proceed towards Parliament House.