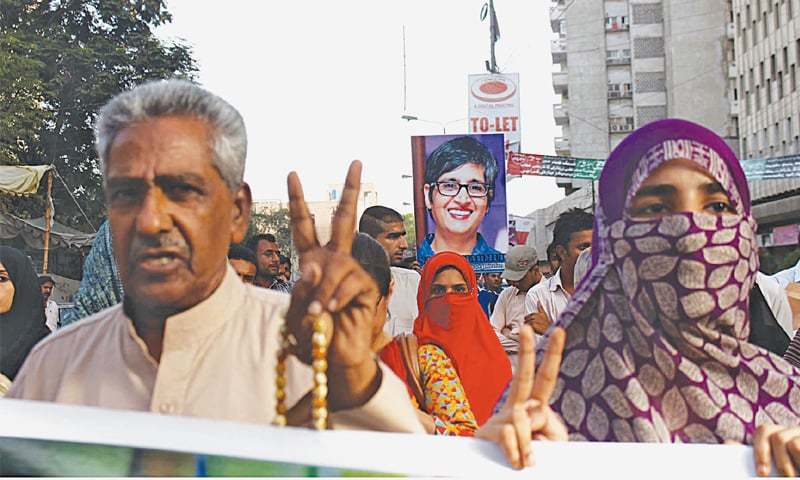 KARACHI: Investigators have found no match for casings of bullets that killed a prominent human rights activist, dashing hopes for quick answers to a murder that has raised fears for the safety of dissenting voices.

Gunmen on a motorcycle attacked activist Sabeen Mahmud, the director of The Second Floor (T2F) on April 24 in the Defence area, as she was leaving her cafe, where she held art exhibitions and talks, just after hosting a discussion on disappearances in Balochistan.

The investigators found spent bullet casings at the scene but drew a blank.

“That suggests that a new group or new weapon has been used in the killing,” said a law enforcement official, requesting anonymity.

Police said their only witness is Ms Mahmud’s mother, who was with her and was wounded.

The investigators suspected that the killers had a back-up team of two men on a motorcycle and the police were examining the CCTV footage.

Desperate for clues, they were monitoring social media in hopes that loose talk could provide a lead, said another senior law enforcement official.

Ms Mahmud had told friends that officials of the Inter-Services Intelligence visited her in 2013 to ask about her work and finances, the law enforcement official said.

She had recently asked friends if she should go ahead with the Balochistan talk, he added.

The army condemned her killing, saying its intelligence agents would help in the investigation.

Human rights workers have not been reassured.

“There’s a lot of fear among the people, about whoever speaks out about Balochistan, what’s going to happen,” said Rukhsana Shama of the rights group Bedari. “It’s easy to point fingers at the agencies but no one knows.”

The first law enforcement official said her killers might have taken advantage of the tension between the authorities and Ms Mahmud over her Balochistan activism.

“Our hunch is that some third party exploited the standoff,” he said, suggesting India.

The case was unlikely to be solved if any security agency was behind it, the first official said.

Suspicion that Pakistan’s intelligence community was somehow responsible for the killing, in a bid to silence dissent, is dangerous to national security, said political commentator Moeed Pirzada.

“It is of vital importance that intelligence agencies work hard to expose the murderers, to restore trust between the state and its most aware citizens,” Pirzada added.

Series of protests from Thursday

Civil society on Tuesday decided to organise a series of protests from Thursday against Ms Mahmud’s killing, adds our staff reporter.

Participants in a meeting held at the Karachi Press Club decided to campaign for the fair and speedy investigation into Ms Mahmud’s murder.

“We the concerned citizens for peace held a meeting at the KPC in protest over the assassination of Sabeen Mahmud, a champion for love, peace and free speech,” said a statement. “The participants at the meeting also decided to hold a series of protests, first of which will be held on April 30 outside the KPC at 4pm.”

The people demanded justice for Ms Mahmud and that her killers be arrested and brought to trial, said the statement.

It added that a series of protests would take place every evening from 8-9pm at Clifton’s Teen Talwar.

“We appeal to all those who believe in justice and peace and are concerned about the violence in the city to participate in large numbers,” it said.