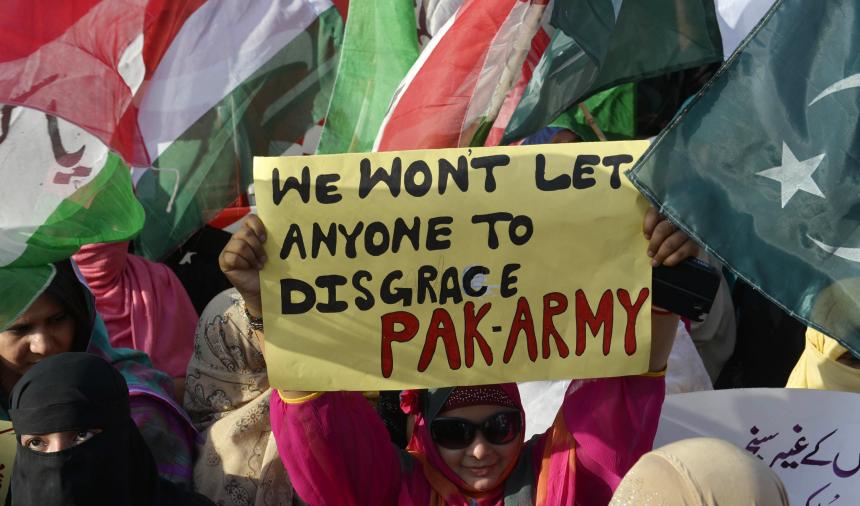 Imran Khan, Tahir ul Qadri, and the ISI [Inter-Services Intelligence] are our best friends,” our weekly editorial meeting at Pakistan’s Express Tribune was (jokingly) told on Aug. 13, 2014, a day before the two political leaders began their separate long marches from Lahore to Islamabad, and plunged the country into crisis. “We know it’s not easy, but that’s the way it is — at least for now. I promise to make things better soon,” said the editor, who had called the meeting to inform us about the media group’s editorial policy during the sit-ins and protests that would eventually, momentarily paralyze the Pakistani government.

The senior editorial staff, myself included, reluctantly agreed to the orders, which came from the CEO, because our jobs were on the line. Media groups in Pakistan are family-owned and make all decisions unilaterally — regardless of whether they concern marketing and finance or editorial content and policy — advancing their personal agendas through the influential mainstream outlets at their disposal. A majority of the CEOs and media house owners are businessmen, with no background (or interest) in the ethics of journalism. The owners and publishers make it very clear to their newsrooms and staff — including the editor — that any tilt or gloss they proscribe is non-negotiable. As a result, serious concerns persist about violence against and the intimidation of members of the media. In fact, Pakistan ranks 158 out of 180 countries in the 2014 World Press Freedom Index.

Yet there is also a more elusive problem within the country’s press landscape: the collusion of Pakistan’s powerful military and the nation’s media outlets. I experienced this first-hand while I worked as a journalist at the Express Tribune during the recent protests led by Khan, the populist cricketer-turned-politician, and Qadri, a Pakistani-Canadian cleric and soapbox orator.

During this time, the owners of Pakistani media powerhouses — namely ARY News, the Express Media Group, and Dunya News — received instructions from the military establishment to support the “dissenting” leaders and their sit-ins. The military was using the media to add muscle and might to the anti-government movement in an attempt to cut Prime Minister Nawaz Sharif down to size.

At the Express Media Group, anything related to Khan and Qadri were inexorably the lead stories on the front page or the hourly news bulletin. I witnessed polls showing support for Sharif being censored, while news stories on the misconduct of the protesters, along with any evidence that support among the protestors for Khan and Qadri was dwindling, were axed. While the BBC was publishing stories about how Qadri’s protesters were allegedly being paid and Dawn, the leading English-language Pakistani newspaper — and the Express Tribune’s main competitor — was writing powerful editorials about the military’s role in the political crisis, we were making sure nothing negative about them went to print.

Day after day, my national editor told me about how he received frantic telephone calls late in the evening about what the lead story should be for the next day and what angle the article should take. First, we were told to focus on Khan. “Take this as Imran’s top quote,” “This should be in the headline,” “Take a bigger picture of him” were the specific directives given by the CEO. Shortly after, the news group’s owner was agitated that the newspaper had not been focusing enough on Qadri. We later found out that the military establishment was supporting the two leaders equally and the media was expected to do the same.

In their professional capacities, the editor and desk editors tried to put up a fight: they allowed some columns against the protests slip through; they did not extend the restrictions to publish against Khan and Qadri to the Web version of the newspaper; and they encouraged reporters to focus on the paper’s strengths, such as investigative and research-based reports. However, it was difficult for the staff to keep its spirits high with the CEO’s interference and his readiness to abide by the establishment’s instructions. To be sure, the dictates were never given to the senior editorial staff, of which I was a part, directly. They were instead relayed to the editor or the national editor (who heads the main National Desk) via the CEO and then forwarded to us.

People often speculate about the media-military collusion in Pakistan, but in the instance of the current political standoff in the federal capital, as well as the Geo News controversy — where the establishment was seen resorting to extreme methods, such as forcing cable operators to suspend Geo’s transmission and impelling competing media houses to publish news stories against Geo, to curtail the broadcast of the largest and most-watched television channel for accusing then-ISI chief Zaheer-ul-Islam of being behind the gun attack on Hamid Mir, its most-popular anchor — the media and the military worked hand-in-hand.

In most cases, it is common knowledge that the heavyweight broadcast anchors have strong ties to members of the military establishment, and they personally take direct instructions that are then conveyed to the owners of their respective media groups. This bias is often reflected in their coverage.

The anchors not only indulge in inaccurate reporting, but also shape political discourse against the democratically elected government and even the efficacy of democracy itself. Former Pakistani government officials have corroborated this by narrating their experience. One senior official told me: “Television anchors receive funds from the military establishment, if not the civilian Ministry of Information and Broadcasting. Today, all the Pakistani intelligence agencies and the military have media departments that ostensibly only disseminate background information and press briefings, but are actually guiding and managing discourses and the national narrative.”

And this narrative is pro-army. Consider one example in particular.

On Aug. 31, when Khan’s and Qadri’s protesters had stormed the Parliament’s gates, Mubasher Lucman, a television anchor for ARY News — now the most-watched TV channel in Pakistan after Geo’s transmission was illegally suspended — saluted the army during a live broadcast and invited the military to take over “and save the protesters and the country.” Earlier on Aug. 25, he welcomed the “sound of boots” (a reference to the military), as he had no sympathy for corrupt politicians who looted the country.

As if this was not enough, Lucman and his fellow anchors at ARY, some of whom are known to have strong ties to the army and the ISI, also made unverified claims on live television that seven protesters had been killed by riot police in the ensuing clash. (It was reported by other news outlets that three people had died, one by accident.) Moreover, when Javed Hashmi, the estranged president of Khan’s Pakistan Tehreek-e-Insaaf (PTI) party, came out in public on Sep. 1 to reveal how Khan was banking on the military and the judiciary to end Sharif’s government, Lucman slammed Hashmi, while his fellow anchor, Fawad Chaudhry, insisted that Hashmi had been “planted in [the] PTI” by the prime minister’s closest aides.

Hashmi, who is known for his principled politics and who has been tortured and imprisoned by the military over the years, made the claims about Khan in a press conference where he revealed that: “Imran Khan said we cannot move forward without the army…He told us that he has settled all the matters; there will be elections in September.”

Soon after this, we at the Express Tribune were instructed by the military to highlight statements released by the army’s Inter-Services Public Relations office about how it was not a party to the crisis. When the military was on the defensive, issuing rebuttals to Hashmi’s “revelations,” we saw the instructions lessen and the powerful institution backing off. Yet media discourse throughout Pakistan’s history has been influenced by the military, the most powerful institution in the country, or, in a few cases, has been strong-armed and intimidated by civilian heads of state until they were ousted by the military. There is a structural bias against democratic institutions and elected officials in Pakistan, and such a discourse has the not-unintentional effect of making the military seem like a better alternative, thereby reinforcing the notion that democracy does not work.

Media owners seem to “choose” the military establishment as it has been the most potent force and the only constant in Pakistan’s polity. The institutional context of the country’s power structure and patronage politics compels organizations and individuals to be a part of the system, which begins and ends with the military and its premier intelligence agency, the ISI. Abiding by the system without asking questions is rewarded. But even in a country with a deeply problematic history, the intensity of the recent interference is shocking.

Before the current political standoff, the establishment was dictating headlines and editorial policies during Sharif’s trip to India for the inauguration of his counterpart, Narendra Modi, on May 26. While working at the Express Tribune, I was instructed to change the lead story on the Sharif-Modi meeting to give it a negative tint, concentrating on how the Indian prime minister was not welcoming as he focused on security issues. The phrase “show-cause” had to be inserted in the headline, which was a direct order from the CEO, who was getting instructions from the military.

To be sure, the Express Media Group and its staff have been attacked several times during the past year for raising sensitive issues. And here too it tried to balance the military-sponsored anti-government slant by giving room to other opinions in the form of editorials and separate stories. But it also had to survive in a system where the military dominates every aspect of public life. It is a tough choice as the military refuses to protect the country’s journalists, even as the media continues to safeguard the military’s image and ostensible apolitical status.

Neha Ansari worked as a senior sub-editor and shift-in-charge at the Express Tribune’s national desk in Karachi, Pakistan from 2013 to 2014. She is now a visiting researcher at the Carnegie Endowment for International Peace in Washington, D.C.